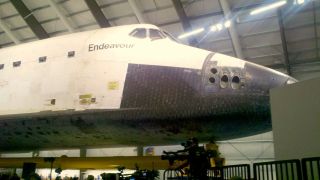 Endeavour is a tight fit inside its new home at the California Science Center, but the accommodations are temporary until a new facility can be completed.
(Image: © Rod Pyle/SPACE.com)

The opening ceremonies were befitting of the orbiter's return to Southern California, where it was built back in the 1980s.

Endeavour arrived at the museum Oct. 14, after being flown from Florida to Los Angeles atop a jumbo jet, and then rolled through city streets from the airport to the museum. [Photos: Shuttle Endeavour's Street Parade]

The orbiter is being temporarily housed in a metal hangar building connected to the main California Science Center museum. A new, much larger building will be completed nearby within a few years, and will feature the shuttle in vertical configuration, complete with solid rocket boosters and an external tank mock-up. This will make Endeavour the only retired shuttle to be displayed in "launch mode."

Endeavour's sibling shuttle orbiters, Discovery and Atlantis, will spend their retirement at the Smithsonian National Air and Space Museum outside Washington, D.C., and the Kennedy Space Center Visitors Center in Florida, respectively, while the prototype shuttle Enterprise is on display at New York City's Intrepid Sea, Air and Space Museum.

After opening remarks, the Grammy Award-winning singer James Ingram delivered a stirring rendition of "I Believe I Can Fly." The assembled crowd joined in for the final refrains. Ingram later commented that he was very proud to be associated with this grand opening, and how glad he was to have such an icon of the space age in Los Angeles.

"It gives me hope that one day regular folks like us can go into space and come back transformed," he said.

Speaking out against naysayers

Among the featured speakers were California Governor Jerry Brown, who pointed out that Endeavour had been built just a few miles away at (then) Rockwell International, and had been a boon to the California economy. He challenged the "many naysayers who ask why did we spend billions on the shuttle and $2.5 billion on Curiosity?"

Los Angeles mayor Antonio Villaraigosa also took the podium to comment on what Endeavour means to Los Angeles and the future of science and technology education. When the mayor addressed the children present, asking who wanted to be an astronaut, most of the adults in the room joined the kids to raise their hands with great enthusiasm.

Nichelle Nichols of "Star Trek" television fame was also present, as was June Lockhart from "Lost in Space." Both were warmly welcomed by the crowd, with Nichols acknowledging her introduction with a famous Vulcan gesture and a hearty "Live long and prosper."

After the speeches and a vibrant dance number choreographed by dancer and actress Debbie Allen (to the quirky theme of "Men In Black"), the schoolchildren, who had shown masterful restraint, were free to wander the exhibit and marvel at the machine above them. More than one simply stood, mouth agape, taking in the vast tiled underbody of the orbiter. [Shuttle Endeavour: 6 Surprising Facts]

Antonio Rosales, a fourth grader at the Science Center's resident magnet elementary school, could barely take his eyes off the orbiter.  "It's so big!" he exclaimed. "I like science, and my school is really cool because we get to do science. And now we have this," he gestured to the orbiter, "And that's really, really cool."

Sophie Juarez, a second grade student, proudly announced that she knew the number of flights that Endeavour had made. "Twenty-five!" she beamed. "It went to space 25 times." She then looked shyly at her friends surrounding her, and whispered, "I want to be an astronaut when I grow up and go to the moon!"

David Dickenson of Los Angeles stood nearby with his young son. "I wanted him to see the shuttle and remember this moment," he said. The boy, Matthew, pulled his father toward the nearby shuttle main engine display.  "He's only five, so it may be a bit soon. But I think he'll remember it. I sure will," Disckenson said.

The main engine exhibit, video kiosks and a Spacelab unit round out the exhibits inside the hangar.

A few hundred feet away inside the adjoining museum, well over a thousand people stood in line awaiting the public opening at 11 a.m. PDT. Clarisse Washington was typical of the crowd: "I just had to come," she said. "The shuttle is such a part of us, of L.A., you know? I just can't wait to get inside!"

Behind her stood Ralph and Linda Johnson. "We came from the Bay Area to see this opening," Ralph remarked. "It's not everyday that a shuttle arrives in California, and now that we are retired, it's time to do the things that count."

Outside a balmy sun warmed further crowds gathering around the building hoping for a chance to see the newly arrived orbiter. Hawkers sold American flags and "Endeavour Mission 26" buttons. It was a festive picture and the crowds were all smiles as they prepared to enter the exhibit.

Bruce Wexler of Westminster, Calif., summed it up best. "Look at these people! It's just so thrilling to see all these people come out to see the shuttle," he said. "It's great to see the interest in space, and I think this exhibit will be good for getting kids interested in science again."