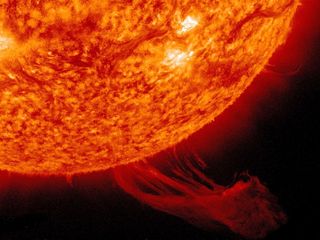 A giant wave of super-hot solar plasma larger than the Earth erupted from the sun on Friday (Oct. 19) in a spectacular display captured by a NASA spacecraft.

The huge solar prominence occurred at 4:15 a.m. EDT (0815 GMT) and was recorded in amazing detail by the high-definition cameras aboard NASA's Solar Dynamics Observatory before escaping the sun.

"Once it started breaking away, the process only took 10 hours before it was out of sight," NASA media specialist Steele Hill explained in a photo description. "The prominence stretched out many times the size of Earth."

The Solar Dynamics Observatory showed the solar prominence as a wispy red-orange wave stretching out from the lower right section of the sun. The image was recorded in the 304 Angstrom wavelength of extreme ultraviolet light, according to Hill.

Prominences are eruptions of charged solar plasma that appear to arc out away from the sun's edge, or limb, in spacecraft and telescope views. The structures are shaped by extreme magnetic field. Some loop-like prominences are short-lived, lasting only a few minutes. Others can be more stable, lasting hours or days, NASA scientists have said in the past.

NASA's Solar Dynamics Observatory is one of several spacecraft keeping a constant watch on the sun to track major solar flares, eruptions other space weather events. The sun is currently in an active phase of its 11-year solar weather cycle and is expected to reach its peak activity in 2013.

The current solar weather cycle is known as Solar Cycle 24. The Solar Dynamics Observatory has been tracing the sun's weather activity since the probe's launch in 2010.