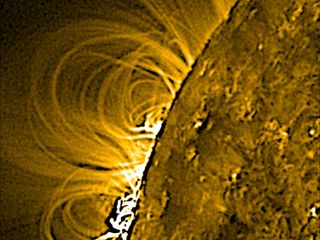 This image of the sun (as observed by NASA's Solar Dynamics Observatory on Feb. 24, 2011) shows light emitted by million degree plasma, a temperature that is particularly good at highlighting fine arcs in the sun's atmosphere called coronal loops. It has been processed with a gradient filter that enhances the loops even more for research purposes.
(Image: © NASA/A. Young )

Gradient filters to boost contrast in photos aren't just for photographers anymore. Astronomers are using them to take a better look at our sun, too.

NASA scientists say they can apply the photo-editing technique to enhance places of contrast around the sun, making its explosive plasma loops not only more stunning, but also easier to study.

A new video of the sun from the Solar Dynamics Observatory shows coronal loops bursting from the sun. These huge arcs of solar material, which are constrained by magnetic fields, can swirl slowly on the edge of the sun for hours, sometimes even days.

Scientists at the observatory carefully adjusted gradient algorithms to make these coronal loops appear much more defined in the new video, NASA officials said in a statement Thursday (Oct. 18). The loops — highlighted in orange and red — pop out next to the more fuzzy areas in the sun's atmosphere.

Sharp observations of plasma loops can help astronomers understand the sun's complicated magnetic fields, according to NASA. And coronal loops are of particular interest to scientists because they may be the root of explosive solar flares that can wreak havoc on satellites in space and power grids on Earth.

The sun is currently going through an active phase of its 11-year solar weather cycle and is expected to reach its peak activity in 2013. The current sun weather cycle is known as Solar Cycle 24.

The Solar Dynamics Observatory has been recording high-definition images and video of the sun since its launch in 2010.