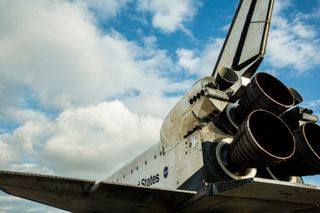 Space shuttle Endeavour, you're a star. A captivating new time-lapse movie has condensed Endeavour's recent three-day road trip to a Los Angeles museum into mere minutes, offering a spectacular tribute to the spaceship and the City of Angels.

The amazing time-lapse view of Endeavour's L.A. street journey, which ran from Friday to late Sunday (Oct. 12 to 14), was created by a team of photographers organized by Matthew Givot. The photographers spent four days following Endeavour's parade through Los Angeles as the shuttle made its way from Los Angeles International Airport to its final home, the California Science Center, to be placed on public display.

Mission 26 The Big Endeavour from Givot on Vimeo.

"The only thing that kept us going was pure love the art and adrenaline," Givot wrote in a video description on Vimeo, where he posted the time-lapse movie "Mission 26: The Big Endeavour." The title is a nod to Endeavour's final trip after 25 space missions during its career.

Endeavour made the 12-mile (19 kilometers) trip from the airport to the museum at a slow, careful pace, with work crews taking care to avoid snaring the shuttle on power lines or scraping its wings on trees or other obstacles. [Photos: Shuttle Endeavour Arrives at L.A. Museum Home]

Huge crowds turned out to see the space shuttle drive along the streets of Los Angeles. While a NASA transporter vehicle hauled the shuttle much of the way, a Toyota Tundra pickup truck towed Endeavour across a 405 Freeway overpass during the trip.

"The biggest thing for me, it was the people," Givot told SPACE.com. "It was just seeing the joy and excitement, and their pride of living in L.A. That was the best part of the whole thing."

It was clear to those watching Endeavour that the event was a once-in-a-lifetime experience, he added.

Givot was joined in the time-lapse project by photographers Joe Capra, Chris Pritchard, Brian Hawkins, Andrew Walker and Ryan Killackey. They worked closely with the Inglewood Police Department to prepare their jaw-dropping shots.

NASA retired Endeavour along with the rest of its space shuttle fleet in 2011 after 30 years of spaceflight. The agency plans to use new private spacecraft to carry astronauts and cargo into orbit, and is developing a new rocket and space capsule for deep space missions.

Meanwhile, Endeavour and its sister ships Discovery and Atlantis, as well as the test orbiter Enterprise, are all being placed on public display, though Endeavour is the only one on the West Coast.  Endeavour was delivered to Los Angeles on Sept. 21 after a three-day flight from NASA's Kennedy Space Center in Florida.

"This has been an amazing experience that I will never forget," Givot wrote in his description. "My hope is that this film will show you the amount of dedicated people, and the teamwork, that it took to get the Endeavor to its new home."