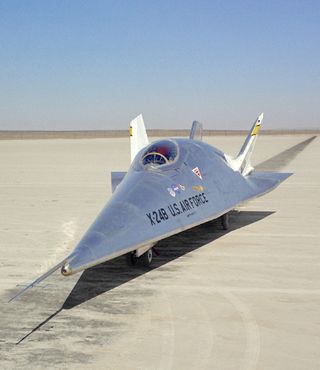 The X-24B, the last wingless aircraft in the Dryden Lifting Body program, was designed to fly back to Earth from space.
(Image: © NASA.)

In this historical photo from the U.S. space agency, the X-24B is seen here on the lakebed at the NASA Dryden Flight Research Center, Edwards, California, in January of 1973. The X-24B was the last aircraft to fly in Dryden's Lifting Body program. Lifting bodies were wingless vehicles designed to fly back to Earth from space and be landed like an aircraft at a pre-determined site.

First to fly the X-24B was John Manke, conducting a glide flight on August 1, 1973. He was also the pilot on the first powered mission on November 15, 1973. Among the final flights with the X-24B were two precise landings on the main concrete runway at Edwards which showed that accurate unpowered reentry vehicle landings were operationally feasible. These missions were flown by Manke and Air Force Maj. Mike Love, and represented the final milestone in a program that helped write the flight plan for today's Space Shuttle program.

The information the lifting body program generated contributed to the data base that led to development of today's Space Shuttle program. The X-24B is on public display at the Air Force Museum, Wright-Patterson AFB, Ohio.