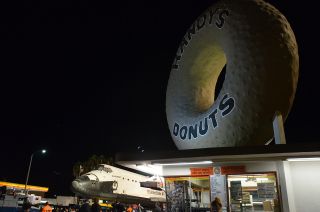 The space shuttle Endeavour's unprecedented cross-country trek will finally come to an end today (Oct. 13) when it rolls to a stop at its museum retirement home in Los Angeles.

Museum officials are thrilled that the space shuttle is nearly home.

Late Friday night, a Toyota Tundra truck hitched up to Endeavour  to tow the155,000-pound (70,300-kilogram) to spaceship across the 405 freeway. Stuntman Matt McBride, a precision driver, was at the wheel, with former NASA astronaut Garrett Reisman, who flew on Endeavour during his first spaceflight in 2008, riding along in the passenger seat.

Endeavour was awarded to the museum in April 2011, a few months before NASA retired its iconic shuttle fleet after 30 years of orbital service. The Science Center has been planning for — and eagerly anticipating — Endeavour's arrival ever since.

Organizing the move was no simple matter. Endeavour first had to fly from NASA's Kennedy Space Center (KSC) in Florida, where technicians had been decommissioning the orbiter after its final space mission touched down in June 2011.

Endeavour took off from KSC on Sept. 19, riding piggyback atop a 747 carrier jet on a cross-country farewell tour. The shuttle landed in Houston and at California's Edwards Air Force Base, and it flew over cities such as Tucson, Ariz., San Francisco and Sacramento before finally landing in L.A. on Sept. 21.

That was the relatively easy part; the shuttle still needed to get from the airport to the museum via the streets of Los Angeles. A vehicle as large as Endeavour had never been transported through the middle of a major city before, Rudolph said.

California Science Center officials picked a 12-mile route and worked with personnel from the City of Los Angeles, police departments, utilities commissions and other entities to make the path passable for the orbiter.

Some 400 trees needed to come down, and personnel are temporarily removing streetlights and power lines along the route to let Endeavour squeeze through atop its remote-controlled tranport vehicles, which are chugging along at a top speed of 2 mph (3.2 mph).

The shuttle's street journey is quite a sight, say people who witnessed Friday's leg of the trip up close.

"It was both majestic and surreal to see space shuttle Endeavour slowly roll through the streets of Los Angeles on its road trip to the California Science Center," space history and artifacts expert Robert Pearlman, editor of collectSPACE.com, told SPACE.com via email.

"There was a real sense of history inspired by the 25 missions that it flew from 1992 to 2011, but also the history being created by this journey and what the trip represented, the shuttle entering history and becoming a museum exhibit," Pearlman added.You can see Pearlman's photos of Endeavour on L.A. streets here.

People who want to get a look at Endeavour today have good opportunities at several different locations.

Exposition Park: The final chance to see Endeavour on the move comes at Exposition Park on Bill Robertson Lane, as the shuttle rolls up to its museum home this evening.

While the California Science Center will get its hands on Endeavour tonight, it will still be a few weeks before the shuttle goes on display. The museum plans to open a temporary Endeavour exhibit Oct. 30, with the permanent exhibit debuting in about five years.

Editor's Note: If you snap any photos of Endeavour during its trip through L.A.'s streets and want to share them with SPACE.com, send the pictures, comments and location info to managing editor Tariq Malik at tmalik@space.com.