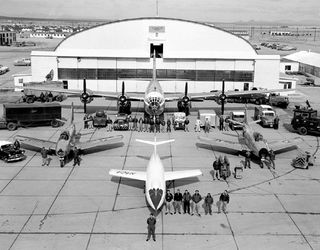 In this historical photo from the U.S. space agency, the fleet of NACA test aircraft are assembled in front of the hangar at the High Speed Flight Stationin January 1952, (later renamed the Dryden Flight Research Center) in Edwards, California.

The white aircraft in the foreground is a Douglas Aircraft D-558-2 Skyrocket. To its left and right are North American F-86 Sabre chase aircraft. Directly behind the D-558-2 is the P2B-1 Superfortress, (the Navy version of the Air Force B-29). Also known as the "mothership," the P2B-1 carried aloft the D-558-2 Skyrocket under its fuselage. Once reaching altitude, the D-558-2 was released from the "mothership" after which the pilot ignited its onboard rocket engine.