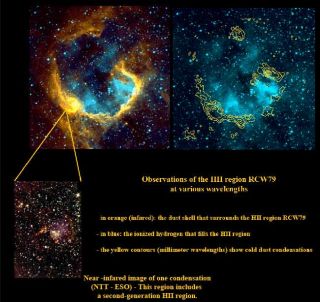 Some regions in space are especially good at creating massive stars. Astronomers know the recipe for creating a star in one of these stellar nurseries calls for hydrogen gas, dust, and some amount of heat and gravity, but they still don't know quite how all the parts come together or what triggers the event.

So several theories have been proposed. One predicts that low-mass stars accrete surrounding material. Another calls for the forceful combination of two protostars. A third, called the "collect-and-collapse" model, says that a parent massive star influences the formation of second-generation stars.

Now, a collection of images presented by astronomers at the Laboratoire d'Astrophysique de Marseille, France provides the most complete and detailed evidence supporting the collect-and-collapse model, without ruling out the other models.

Collect-and-collapse works like this: When a star reaches a mass eight times greater than the Sun, it begins to emit intense amounts of energy in the form of ultraviolet photons, triggering a series of events that lead to the formation of massive stars. These highly-energized photons react with surrounding gas molecules, and the region near the star becomes filled with ionized hydrogen gas. Once a region is acting this way, it becomes known as an HII region.

This ionized gas inside an HII region is hot. Like all hot things it expands, and it does so continuously since the area outside the region is much cooler. As the region expands, dust and gas begin to collect along the outer edges like a broom sweeping across a dirty floor.

After a while, gravitational instabilities cause the dust and gas to fragment into clumps, which are large enough to collapse and form new, second-generation stars.

While many scientists subscribed to the collect-and-collapse model, no strong evidence existed until the release of this set of images of Galactic HII region RCW 79, about 14,000 light-years from Earth. This collection of images gives the most complete look into a "triggered" star-forming region, clearly depicting each of its characteristics.

In the most recently released set of images, an orange version shows the dust shell that surrounds the HII region RCW 79. The blue image highlights ionized hydrogen, clearly showing that it fills the inside of the region. The yellow represents the condensation of cold dust in the outer shell of the region.

Using the mid-infrared Spitzer observations from the GLIMPSE survey, the team has identified newly-formed, second-generation massive stars associated with the main condensations.

Based on the locations and morphological relations between these structures, the team concluded that these observations agreed very well with the collapse-and-collect process and that it is the main trigger for massive star formation along the borders of this region.

This research is detailed in an upcoming issue of the journal Astronomy & Astrophysics.