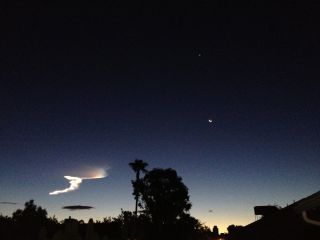 Stargazer Ryan Eiger captured this stunning photo of an Army missile contrail along with Venus and the moon over Scottsdale, Ariz., before dawn on Sept. 13, 2012. The contrail was caused by an Amry Juno rocket during a missile intercept test from Fort Wingate near Gallup, N.M.
(Image: © Ryan Eiger)

A spectacular U.S. Army missile test in New Mexico Thursday (Sept. 13) lit up the predawn sky over the southwestern United States, triggering a flood of frantic UFO reports and hundreds of calls to military officials from as far away as Denver and Los Angeles.

The amazing night sky sight was created by the launch of an Army Juno missile early Thursday from Fort Wingate in New Mexico, which soared high into the atmosphere on its way to the White Sands Missile Range to be intercepted by a Patriot missile. The unarmed Juno rocket flew so high that its long contrail reflected sunlight from the yet-to-rise sun, sparking a dazzling night sky light show.

Marlin said her office received more than 100 calls and a flood of emails from observers who saw the Juno rocket's contrail from states across the Southwest. According to the Associated Press, the missile test led to widespread reports from people who regarded the shiny rocket exhaust as a UFO sighting in the sky.

Marlin said she received calls from as far away as Denver, Salt Lake City in Utah, Las Vegas and Los Angeles reporting the sighting.

"Conditions were just right for it to be seen from far away," Marlin said, adding that the view was caused when the Juno missile's exhaust froze in the upper atmosphere. "When it freezes, those little ice crystals act like prisms to reflect sunlight. It creates that amazing light show."

Because the contrail crossed several layers of the Earth's atmosphere, it was sculpted by high altitude winds, perhaps surprising observers used to seeing the straight-line contrails from airplanes, she added.

In Scottsdale, Ariz., observer Ryan Eiger was walking his dogs before sunrise and snapped a photo of the Juno missile contrail shining with the moon and Venus.

"I looked up quickly noticing the contrail in the east. I ran and got my iPhone and it happened to be just north of both the moon and Venus," Eiger said in an email. "The contrail was amazing. It sort of resembled a cloud except for the very colorful tail it had."

The wispy, but still bright, Juno contrail was also photographed by Linda and Dick Buscher of Anthem, Ariz., just outside of Phoenix, who also sent their photos into SPACE.com.

Marlin said Thursday's missile launch was the 14th test of its kind since 1998. Sometimes the Juno contrails have been spotted from far-off locales, and other times not. Prior to Thursday's launch, the furthest reports from observers came from Phoenix and Colorado, she said.

"It was fun, the number of calls that we received yesterday," Marlin said. "They were mostly incredulous, like 'That was so cool!'"