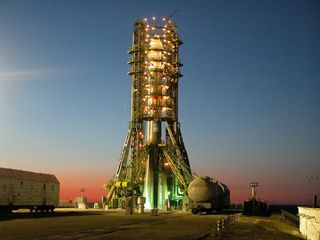 ESA's Venus Express spacecraft and its Soyuz-Fregat rocket sit atop their launch pad at Baikonur Cosmodrome, Kazakhstan in preparations for a Nov. 8, 2005 launch.
(Image: © ESA.)

BERLIN (AP) - Scientistswere counting down Tuesday for the blast off of a Russian booster rocketcarrying a European-built probe aimed at exploring the hot, dense atmospherearound Venus.

Venus Express wasoriginally scheduled to go up Oct. 26, but the launch was postponedafter checks revealed a problem with the thermal insulation in the uppersection of the Soyuz-Fregat rocket. Once it separates from the rocket,scientists at ESA's mission control in Darmstadt, south of Frankfurt, plan tomake contact with the probe.

"We've just had the pre-launchbriefing and everything is in the green zone," said ESA spokeswoman JocelyneLandeau. "Everything is ready for go."

The mission, Europe's firstto Venus, is aimed at exploring the hot and dense atmosphere around the planet,concentrating on its greenhouse effect and the permanent hurricane force windsthat constantly encircle it.

In addition, instruments onthe probe will try to discover whether Venus' many volcanoes are active, andlook at how a planet so similar to Earth could have evolved so differently.

"Venus is still a bigmystery," Gerhard Schwehm, head of the planetary missions at ESA, said Monday.

Not only is Venus the nearestplanet to Earth within the solar system, but the two share also roughly thesame mass and density. Both have inner cores of rock and are believed to havebeen formed at roughly the same time.

But despite these similarities,the two have vastly different atmospheres, with Venus' composed almost entirelyof carbon dioxide with very little water vapor. It is also the hottest surfaceof all the planets and lacks atmospheric pressure.

Venus Express shares manyinstruments with MarsExpress, a sister probe launched in 2003, and the Rosettaprobe, sent last year and bound for a comet.

Venus Express is expectedto begin its experiments in early June.

The last mission to Venuswas Magellan,launched by NASA in 1989. It completed more than 15,000 orbits around theplanet between 1990 and 1994.