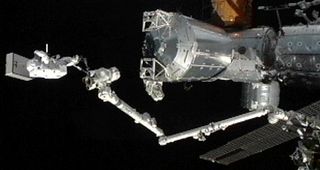 Japanese astronaut Akihiko Hoshides stands a the tip of the International Space Station's robotic arm during an Aug. 30, 2012, spacewalk outside the orbiting lab with crewmate Sunita Williams of NASA.
(Image: © NASA TV)

After an unsuccessful attempt last week to install a new power unit to the exterior of the International Space Station, two astronauts will try again during a spacewalk on Wednesday (Sept. 5).

NASA astronaut Sunita Williams and Japanese spaceflyer Akihiko Hoshide will battle stuck bolts that prevented them from properly installing the power box on the space station's backbone-like truss during their first spacewalk. Tomorrow's outing, which will be the second time the duo works outside the orbiting complex in six days, is scheduled to begin at around 7:15 a.m. EDT (1115 GMT).

Williams and Hoshide spent more than eight hours upgrading the exterior of the station last Thursday (Aug. 30), but a stubborn bolt on the so-called main bus switching unit (MBSU) prevented them from securing the power box to the outpost and attaching its electrical connections.

In an unrelated mishap, a component that ensures power is distributed at the proper amperage and voltage suffered a glitch late Saturday (Sept. 1), NASA officials said. As a result, the station is only able to use five of its eight available power channels. [Photos: Spacewalking Astronauts Fix Up Space Station]

With three power channels unavailable, flight controllers re-allocated available resources aboard the outpost for critical systems and to keep the crew safe. Despite the outages, space station operations have only suffered a minimal impact, and the crew will not be affected as they prepare for tomorrow's spacewalk, agency officials said.

Mission managers opted to proceed with the extra spacewalk after working around the clock since Thursday to analyze the problem.

"The most probable cause is likely a combination of a slight misalignment in the positioning of the spare unit for its installation prior to bolting and possible damage to the threads of the receptacle posts on the S-zero truss to which the MBSU must be bolted in place," NASA officials said in an update.

A meeting will be held today (Sept. 4) to finalize procedures, according to agency officials.

Last week, Williams and Hoshide removed a faulty MBSU and tried to install a new spare, but they were unable to drive in one of the bolts that fastens the unit to the space station's truss. After repeated attempts failed, the astronauts used a tether to temporarily tie the MBSU down, and were forced to wrap up the marathon spacewalk.

The outing lasted 8 hours and 17 minutes, making it the third longest spacewalk in history and the longest ever performed by a space station crew.

Williams and Hoshide spent the weekend reviewing the choreography for the upcoming spacewalk, and preparing tools that will be used to clean and lubricate the MBSU bolts and their corresponding receptacles on the space station's truss.

If the power unit cannot be properly installed, mission managers may opt to have the astronauts bring the box inside for more analysis, NASA officials said.