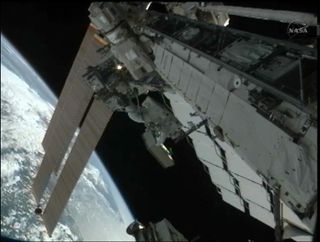 Japanese spacewalker Akihiko Hoshide is pictured holding a failed power switching unit during a spacewalk on Aug. 30, 2012. In the photo, Hoshide is riding on the end of the space station's robotic arm.
(Image: © NASA TV)

A stubborn bolt that prevented two spacewalking astronauts from properly installing a replacement power unit on the exterior of the International Space Station today (Aug. 30) will now require another spacewalk — possibly as early as next week — to attempt to resolve the problem, NASA officials said.

NASA spaceflyer Sunita Williams and Japanese astronaut Akihiko Hoshide spent more than eight hours working outside the orbiting complex today, primarily to remove a faulty power box — called a main bus switching unit (MBSU) — and replace it with a spare. After the old unit was removed and stored, however, the spacewalkers were unable to drive in one of two bolts needed to secure the new box to the station's backbone-like truss.

"If we can determine what we can do to get the MBSU ultimately installed, you'll hear us talking about perhaps trying to do that sooner rather than later in the program," Suffredini told reporters in a news briefing today from the Johnson Space Center in Houston. "If we can, we'll try to get out the door early next week if we can come up with a plan." [Photos: Spacewalking Astronauts Fix Up Space Station]

A main bus switching unit relays power from the space station's solar arrays and distributes it throughout the orbiting lab. Typically, there are four MBSUs operating on the station at any time, and without the use of one, the station is essentially unable to harness the power collected by two of its eight solar arrays, Suffredini explained.

Engineers and flight controllers are currently trying to determine why the bolt is stuck and how they can remedy the situation.

Without the MBSU up and running, NASA officials are also deciding how best to allocate the available power aboard the outpost to keep the crew safe, and with minimal disruption to the station's operations. During the time that the outpost relies on three MBSUs, systems that require a lot of power, such as the space station's robotic arm, will be powered down until they are needed again, said flight director Ed Van Cise.

"We can be creative with how we share power across the channels to provide as much balance as we can across them," Van Cise said. "The space station arm, when it's in use, does draw power, so one thing we'll do if we haven't done it already is, they will disconnect the robotic work station in the U.S. lab so that piece is not drawing power off the power channels. And we'll turn off equipment that is not necessarily required."

After repeated attempts to install the new power unit failed, Williams and Hoshide were forced to use a special tether to temporarily tie it down to the space station's truss.

Today's marathon spacewalk clocked in at a whopping 8 hours and 17 minutes, making it the third longest spacewalk in history and the longest ever performed by a space station crew.