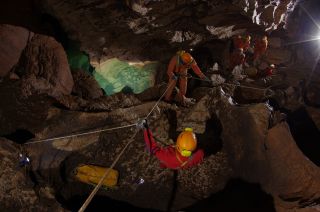 Astronauts go on a "cavewalk" during the European Space Agency's CAVES project. Moving in a cave is similar to a spacewalk, ESA officials say; it requires safety tethering and 3D orientation, with no-touch areas and dangerous, off-limits zones.
(Image: © ESA–V. Crobu)

An international team of astronauts will go underground this week, using a Mediterranean cave system to help them prepare for life hundreds of miles above Earth's surface.

The six astronauts, who represent five different space agencies, will descend Friday (Sept. 7) into the caves of Sardinia, off the west coast of Italy. They'll stay underground for six days during the 2012 run of the European Space Agency-led CAVES project.

CAVES, which stands for Cooperative Adventure for Valuing and Exercising human behaviour and performance Skills, aims to help prepare astronauts for long-duration spaceflight by exposing them to situations in which they must work together to solve problems in challenging conditions.

Cave systems work well as a stand-in for orbiting spacecraft, ESA officials say. Caves, after all, are dark, confined places, and they're isolated from the outside world. Team members will have to adapt to a lack of privacy and comfort, as they would in space as well. [Video: Astronauts to Train in Cave for Space Voyages]

On Friday, the team will descend into the Supramonte cave system of Sardinia's Gennargentu National Park, near the middle of the island.

For the next six days, the astronauts will work together to map and survey the caverns, ESA officials said. The team will also do some science work, including searching for and cataloguing lifeforms — as explorers would do on another planet.

"Nobody has systematically looked for life in these caves," ESA astronaut trainer and CAVES course designer Loredana Bessone said in a statement. "Finding life big and small is always good, so I am very excited we will be looking for exotic bacteria and cave dwellers such as anthropods."

The astronauts will employ safety protocols similar to those used on spacewalks, ESA officials said. They'll also test out a new communication system during their cave mission, which will be monitored by a mission control team based at the cave's entrance.

CAVES 2012 is designed to be as realistic a space simulation as possible, according to ESA. Briefings with mission contol will be held twice a day, as they are aboard the International Space Station. And the crew will be allowed only one shipment of supplies during their six-day cave stay.

Three of the six CAVES 2012 astronauts already have spaceflight experience. Noguchi flew aboard the space shuttle Discovery's STS-114 mission in 2005 and the space station's Expedition 22 in 2009-2010. He has logged a total of 177 days in space.

Finke has notched two six-month stays aboard the space station, once in 2004 and again in 2009. He also flew on the shuttle's STS-134 mission in 2011, which was the final flight of the shuttle Endeavour. He has a total of 381 days on orbit.

Feustel also flew aboard STS-134. He has one other shuttle mission under his belt as well — the STS-125 flight of Atlantis in 2009, which was the last mission to service NASA's venerable Hubble Space Telescope.

The CAVES concept dates to 2006, and a test course took place in 2008. Since then, the project has introduced more spaceflight-like components, ESA officials said. Last year, five astronauts — representing NASA, ESA and the Russian and Japanese space agencies — took part.

NASA also operates several space-analogue missions of its own, including the undersea NEEMO (NASA Extreme Environment Mission Operations Program) project off the coast of Florida. NEEMO-16 wrapped up in June.