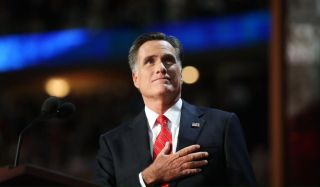 Mitt Romney formally accepted the Republican presidential nomination Thursday (Aug. 30) at the Republican National Convention in Tampa, Fla. In his speech, the White House hopeful spoke about how he was inspired by NASA's Apollo moon program and paid tribute to the late astronaut Neil Armstrong.

Speaking before party delegates at the Tampa Bay Times Forum, Romney recalled the pride of the nation during the Apollo program, which ran from the 1960s through the early 1970s.

"To be an American was to assume that all things were possible," Romney said. "When President Kennedy challenged Americans to get to the moon, the challenge was not whether we would get there, it was only when we'd get there."

The GOP presidential nominee reminisced about the historic moment on July 20, 1969, when Apollo 11 astronaut Neil Armstrong became the first man to step foot on the moon.

"The soles of Neil Armstrong's boots on the moon made permanent impressions on our souls," Romney said. "Ann and I watched those steps together on her parents' sofa. Like all Americans, we went to bed that night knowing we lived in the greatest country in the history of the world." [50 Years of Presidential Space Visions]

Armstrong died on Aug. 25 as the result of complications from cardiovascular surgery. He was 82 years old. Armstrong's life and his extraordinary achievements are being honored today (Aug. 31) in memorial ceremonies held around the country.

"God bless Neil Armstrong," he said. "Tonight, that American flag is still there on the moon. And I don't doubt for a second that Neil Armstrong's spirit is still with us — that unique blend of optimism, humility and the utter confidence that, when the world needs someone to do the really big stuff, you need an American.

Romney, the former Governor of Massachusetts, will duke it out with President Barack Obama in the 2012 presidential elections in November.

Earlier this year, Gene Cernan, the last Apollo moonwalker, Bob Crippen, the first space shuttle pilot, and six other space leaders signed an open letter in support of Romney, when the politician was still seeking the Republican nomination.

"Restoring the U.S. space program to greatness will require the leadership, management skill, and commitment to American exceptionalism possessed by only one candidate in this race: Mitt Romney," read the letter, which was released on Jan. 27. "We support Mitt's candidacy and believe that his approach to space policy will produce results instead of empty promises."

The signatories went on to say that Romney's plans will do more to further U.S. leadership in space.

"As president, Mitt Romney will facilitate close collaboration not only within the government's civil and national security space sectors, but also with the private sector and with research institutions," the letter read. "He will create conditions for a strong and competitive commercial space industry that can contribute greatly to our national capabilities and goals."

Also in January, during a campaign stop in Tampa, Romney stressed that space exploration should remain a priority for the country.

"I happen to believe our space program is important, not only for science but also for commercial development and for military development," Romney said at the time. "And I believe the right mission for NASA should be determined by a president, together with a collection of people from those different areas — from NASA, from the Air Force space program, from our leading universities, and from commercial enterprises."

Romeny also spoke about the benefits of involving the commercial sector in space, and NASA's ability to excite and inspire Americans, particularly younger generations.

"With a president that is actually willing to create a mission and a vision for NASA and for space, we can continue to lead the world," he stated.