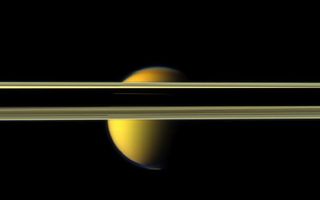 Saturn's rings obscure part of Titan's colorful visage in this space wallpaper from NASA's Cassini spacecraft. The image was obtained with the Cassini spacecraft narrow-angle camera on May 16, 2012, at a distance of approximately 1.9 million miles (3 million kilometers) from Titan.Parts of the rings appear dark near the center of this view because of the shadow cast by the planet. However, a sliver of illuminated Titan can be seen through the Cassini Division in the rings near the middle of this darkness. This view looks toward the northern, sunlit side of the rings from just above the ring plane.