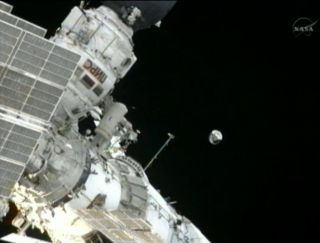 Expedition 32 commander Gennady Padalka, a Russian cosmonaut, throws the small Spherical Satellite into orbit during an Aug. 20, 2012, spacewalk outside the International Space Station. The small satellite will spend three months in orbit and be used for space tracking experiments.
(Image: © NASA TV)

Two Russian cosmonauts merged orbital construction with zero gravity sports in a spacewalk Monday (Aug. 20), when they moved a space station crane and — with a mighty throw — tossed a big steel ball into orbit.

The spacewalk's main goal was to move the space station's Strela-2 crane from a Russian-built Pirs docking port to the station's Zarya control module. To move the Strela-2, Padalka rode at the end of different crane, and took time to enjoy a fabulous view of the Earth far below.

"It's light now … beautiful," said Padalka, the station commander, in Russian, which was translated in a NASA broadcast. "Wow, what a beautiful view." Video from Padalka's helmet camera showed a bright blue Earth lined with white clouds below the space station. [More photos from today's spacewalk]

The Strela-2 crane works like an oversized, hand-operated telescoping pole used to move cargo outside the station. The crane needed to be moved because it was attached to the station's Pirs docking module, a module that will be jettisoned next year to make way for a new Russian space laboratory module, NASA officials said.

Padalka and Malenchenko got off to a late start on the job due to a leaky valve on the space station's Russian side, but swiftly made up for lost time by skipping rest breaks. By the end, the veteran spacewalkers were more than an hour ahead of schedule.

After moving the Strela-2 crane, Padalka tossed the 20-pound (9-kilogram) Spherical Satellite into orbit as part of a Russian space tracking experiment.

The small 21-inch-wide (53-centimeter) ball is essentially a target in space that Russian scientists will use to test space tracking techniques for monitoring space junk and how it re-enters Earth's atmosphere. The ball is expected to stay in orbit for about three months before falling back to Earth, NASA officials said.

Cameras mounted to the hull of the station beamed back amazing views of Padalka's throw, which was aimed to send the satellite below and behind the station so it won't threaten to hit the orbiting lab in the future.

"Beautiful! Do you see it?" Padalka exclaimed as the shiny satellite floated away. "And you can see the sun as it reflected … it is absolutely gorgeous."

Padalka and Malenchenko also completed a long list of other tasks outside the station. They attached new debris shields to the hull of the station's Russian segment, added support struts to an airlock ladder and retrieved a biological sample canister. The cosmonauts were unable to collect a material exposure experiment from the station exterior due to a stuck hinge that prevented it from folding close, NASA officials said.

While Padalka and Malenchenko worked outside, four other members of the space station's Expedition 32 crew remained inside the orbiting lab. The station's current crew is made up of three Russians (Padalka, Malenchenko and Sergei Revin), American astronauts Joe Acaba and Sunita Williams, and Japanese astronaut Akihiko Hoshide.

Monday's spacewalk was the first of two excursions by the station's crew this month. William and Hoshide will venture outside the station on Aug. 30 to perform the second spacewalk.

The spacewalk was also the 163rd spacewalk dedicated to space station construction or maintenance since construction of the outpost began in 1998. It marked the ninth spacewalk for Padalka and the fifth for Malenchenko. The cosmonauts made sure to take time to snap extra photos of each other before wrapping up their work in space.