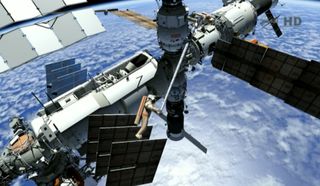 This still image from a NASA TV broadcast shows how Russian cosmonauts will move a crane outside the International Space Station during a spacewalk on Aug. 20, 2012.
(Image: © NASA TV)

A suspected leaky valve on the International Space Station stalled the start of a spacewalk by Russian cosmonauts for nearly an hour today (Aug. 20), forcing them to wait in bulky spacesuits until it was deemed safe to venture outside.

Veteran cosmonauts Gennady Padalka and Yuri Malenchenko were preparing to begin their space station spacewalk when the leak was detected during air pressure tests. Russian flight controllers at the station's Mission Control Center in Moscow asked the cosmonauts to stay put until the leaky valve could be isolated.

"We're in no rush," Padalka radioed Mission Control in Russian, which was translated in a NASA broadcast.

Flight controllers spent almost an hour trying to isolate the leaky valve and monitoring air pressure inside the station's airlock and adjoining modules. Ultimately, they radioed good news to the spacewalkers — the leak was resolved and it was safe to proceed. It was welcome news for the cosmonauts.

At 11:37 a.m. EDT (1337 GMT) —  nearly an hour late — the two cosmonauts finally opened the space station's airlock hatch and prepared to get to work.

Today's spacewalk was originally scheduled to begin at 10:40 a.m. EDT (1440 GMT) and last about 6.5 hours outside the International Space Station. Padalka will make his ninth career spacewalk during the excursion. It is the fifth spacewalk for Malenchenko.

During the excursion, Padalka and Malenchenko plan to install new shields on the station to protect it from damage by micrometeoroids (tiny space rocks), as well as move a hand-operated crane to a new location on the orbiting lab's hull.

The crane needs to be moved to clear space for a new Russian laboratory module expected to arrive at the space station in 2013, NASA mission managers said.

The cosmonauts also hoped to tackle some science tasks during today's spacewalk, including collecting two experiments from the station's exterior and tossing a small spherical satellite into orbit by hand.

The spherical satellite is part of a Russian experiment to test spacecraft tracking techniques. It is expected to stay in orbit for three months before it re-enters Earth's atmosphere and burns up.

Today's spacewalk is the second this year for the space station, but the first for the outpost's current Expedition 32 crew. The station's six-person crew includes Russians Padalka, Malenchenko and Sergei Revin, Americans Joe Acaba and Sunita Williams, and Japanese astronaut Akihiko Hoshide.