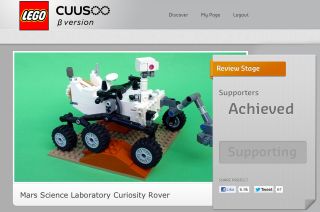 Early Saturday morning (Aug. 18), a do-it-yourself model of the car-size, six-wheeled rover that is now on the Red Planet received its 10,000th vote of support on the LEGO CUUSOO website. The model of Curiosity, which features a working "rocker-bogie" wheel suspension, was designed by a mechanical engineer who helped build the real rover.

"What a cool Mars Science Laboratory Curiosity Rover model and a very timely LEGO CUUSOO project!" wrote the LEGO CUUSOO team on the page profiling the model. "Congratulations on achieving 10,000 supporters. We now officially advance this project to the Review phase."

CUUSOO, which in Japanese means "imagination" or, as it is sometimes translated, "wish," enables fans of the toy construction sets to share their own proposed concepts for the multi-peg bricks. If a design receives 10,000 votes from the CUUSOO community, LEGO will consider it for production as one of its commercial releases.

Stephen Pakbaz, who worked at NASA's Jet Propulsion Laboratory in Pasadena, Calif., where the real Curiosity was built, uploaded his idea for the LEGO version of the rover before Curiosity launched to Mars more than eight months ago. When the one ton rover touched down inside Gale Crater on the night of Aug. 5 (PDT; Aug. 6 EDT), his LEGO model had less than 1,000 votes. Less than a week later, the count had increased to about 1,500 supporters. [Video: Mars Rover Curiosity's Roadtrip Poised to Begin]

It was then that the internet took notice. Social networks, blogs and news sites featured Pakbaz's 1:20 scale rover, pointing others to the LEGO CUUSOO site and a set of free build-it-yourself instructions that Pakbaz provided for the model. In turn, LEGO brick resellers, who use the site BrickLink.com, reported a sudden rash of orders for the 300 or so plastic pieces needed to build Pakbaz's design.

Landing on the Red(dit) Planet

The model made it to the midway point of 5,000 votes on Tuesday (Aug. 14) and was then featured on the CUUSOO website's front page. By Friday, it had racked up another 1,500 votes but it still seemed it would be some time prior to reaching the goal of 10,000. And then this happened:

"Please vote for a new Lego set of the Curiosity Mars rover. Thank you."

By midnight Saturday, the count was so close to 10,000 that a user-driven countdown had started in the CUUSOO member comment section.

"Thanks, everyone, for your enthusiasm and support for this project! These past couple weeks, with the landing of the actual Curiosity rover and then the success of this project, have been very exciting and fun!" Pakbaz wrote on the CUUSOO website. "I can only describe [this] as an overwhelming, otherworldly, experience."

"[And] that's coming from a guy who has designed parts that have been sent to the Moon and Mars!" he wrote.

From review to release

"I thought I would have plenty of time to gather the needed support during Curiosity's primary two-year mission and, perhaps, extended missions," Pakbaz told collectSPACE on Saturday. "My hope was to have a set produced while the real rover was still active on Mars so that the model could help kids learn about the real rover's discoveries as they occurred." [1st Photos of Mars by Curiosity Rover]

While the unexpected race to 10,000 votes increases the odds that Pakbaz's desired timeline could come true, the steps from review to release will still mean waiting many month before the rover could potentially land in stores.

"This project moves from the Idea stage to the Review stage," the LEGO CUUSOO team explained in a note to Pakbaz. "A 'LEGO Jury' composed of designers, product managers, and other key team members will examine the idea. [They will] build concept models and determine if the concept meets our high standards for what it takes to be a LEGO product."

"This includes factors such as playability, safety, and fit with the LEGO brand. Every potential LEGO product goes through a process like this and must meet the same standards," the CUUSOO team wrote.

Pakbaz hopes that his background and his careful design of the rover may help in that process.

"I applied many of my mechanical engineering skills to the design of this project," he told collectSPACE in an e-mail. "I became familiar with LEGO's guidelines and rules for designing models and kept them in mind when I made the rover."

"This model also does not require any new parts to be made. The molds for new pieces can be very expensive. Similarly, this model doesn't use any bricks that are old or currently out of production," he continued.

"Finally, LEGO has had a long and successful partnership with NASA that continues today, so I doubt they will have a problem with securing permission to make Curiosity into a LEGO set," Pakbaz said.

Pakbaz's Curiosity will be included with LEGO's quarterly review of all of the CUUSOO projects that received 10,000 votes between June 5 and Sept. 3, 2012. In addition to the rover, other eligible CUUSOO projects include a model of a Star Wars Sandcrawler and a playset based on Valve's Portal 2 video game.

According to LEGO, the review process itself can take several months, but will culminate in a "go/no go" decision to develop and sell a product based on the Mars Science Laboratory Curiosity Rover concept.

Part of that decision may be whether to include a model of the rover's retro-rocket descent stage, which executed a sky crane maneuver in the final seconds of the landing. Pakbaz built that component too, and displayed photos of it online, but didn't include it with his CUUSOO proposal.

"We really like the Sky Crane as shown [on the site] with the transparent flame pieces, too," the LEGO team wrote.

If green-lit, the project then goes into the "Development phase," which can also take several months. During this time, LEGO designers refine the product and develop it for release, including creating the product materials — the box, instructions and marketing materials — and then get ready for a production run.