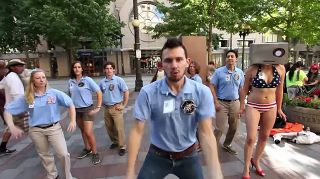 Who says engineers aren't hip? The men and women who landed NASA's Mars rover Curiosity on the Red Planet are so renowned they are now the subject of a hilarious spoof video that is making viral waves.

The video, called "We're NASA and We Know It," is a play on LMFAO's hit song "Sexy and I Know It," but parodies the events surrounding the Curiosity rover's touchdown on Mars on the night of Aug. 5 (PDT; Aug. 6 EDT).

"We're NASA and We Know It," pays impeccable tribute to many of the night's most memorable moments, including the sky blue polo shirts worn by members of the Entry, Descent and Landing (EDL) team, the jar of peanuts that were passed around Mission Control for good luck, and, of course, Ferdowsi's Mohawk. [Video: We're NASA and We Know It]

Alternating between animations of Curiosity's landing, scenes from JPL's Mission Control, and a pair of break-dancing astronauts, an actor playing the role of Ferdowsi raps these funny lyrics:

"When I EDL, time for seven minutes of flamin' hell / Rover's touchin' down, everybody pass peanuts around/ We at Mission Control, gettin' full use out of every sol / Just 25 feet left to go, it's Curiosity, look out below!"

"Kickin' at my console, this is what I see/ Data streaming back from Curiosity/ I got stars on my 'hawk, and I ain't afraid to show it/ We're NASA and we know it."

The song features a catchy refrain of "crane lower that rover," while polo-shirted backup dancers add to the mix. The parody even pays tribute to LMFAO's original music video, but all the prancing around in a leopard-print thong is replaced with a bikini-clad dancer who performs robot moves while wearing a cardboard version of Curiosity's mastlike head.

For its part, NASA seems to approve of this pop culture nod.

The JPL employees who handle the Curiosity rover's social media outreach even responded with this message from the rover's Twitter account: "This fan-made video is AWESOME (and I know it)."

The "Mohawk guy" piped in with his own high praise.

"Well played! @DubHub Video is hilarious & awesome, but don't know that we can dance like that," Ferdowsi tweeted.

The video was created by a group called Satire, and according to their YouTube page, they will be posting new videos every Wednesday about trending topics. Satire's videos can be found here: http://www.youtube.com/user/Satire