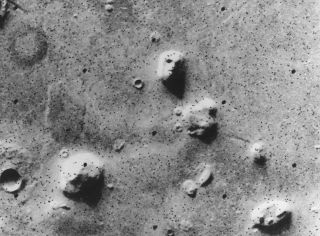 With the rover Curiosity now safely on Mars, the world will be seeing lots of video in the coming months and years from the planet's surface.

The six-legged, nuclear-powered $2 billion robot has already sent back images of Gale Crater where it landed, and it's soon on its way toward a 3-mile-high mountain nearby. Scientists — and indeed the entire world — are watching with bated breath to see what Curiosity can find as it spends the next two years digging, sampling, probing, and analyzing on the Red Planet's rocky surface.

Indeed, NASA images have previously been claimed to show evidence of Martian life.

A man named Richard Hoagland claimed that 1976 photographs of the Cydonia region of Mars showed a human-like face. The so-called "Face on Mars" rose to international fame as Hoagland waxed speculatively about the significance of the stunning find: Was it a sign for us from extraterrestrials? Where were the builders of this magnificent monument? On April 5, 1998, the Mars Global Surveyor took photographs of the same region in far higher resolution than was possible in 1976. The new images clearly showed an area heavily eroded, and that the "face" was simply the result of low image quality, the brain's tendency to see human forms and faces, and tricks of light and shadow. [5 Mars Myths and Misconceptions]

In 2001 an amateur astronomer found what he believed to be a mysterious rectangular structure on the surface of Mars while looking at a program called Google Mars featuring satellite images of the planet. Professional astronomers explained that it was in fact an artifact created by the interference of cosmic rays; the anomalous shape was created in the camera, not on the surface of Mars.

Photos of the surface of Mars taken by the NASA robot Spirit in 2008 were said to show a humanlike figure. Several Internet sites posted the image and suggested the figure could be alive, sparking speculation and controversy. The real explanation, according to astronomer Phil Plait of the Bad Astronomy website, is that "The rock on Mars is actually just a few inches high and a few yards from the camera. A few million years of Martian winds sculpted it into an odd shape, which happens to look like, well, a Bigfoot!"

Then in 2010 a team of psychics led by Courtney Brown, a researcher at Emory University, claimed to have found evidence not only of life on Mars in NASA photos, but also a large industrial dome and a plume of waste coming from it. In a video presentationtitled "Evidence of Artificiality on Mars," Brown claimed to have found "a very large dome that is highly reflective, it looks like it's made of some sort of resin material." Needless to say, no other evidence of an alien dome has ever been found.

History and human psychology tell us that sooner or later, one or more of the thousands of images beaming to us from Curiosity 352 million miles away will contain some glitch, anomaly, or trick of light that will be interpreted by someone as evidence of Martians. Of course it's possible that the rover will find real, actual evidence of life on Mars — but it probably won't be in the form of alien bases.