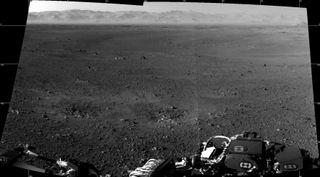 These are the first two full-resolution images of the Martian surface from the Navigation cameras on NASA's Curiosity rover, which are located on the rover's "head" or mast. The rim of Gale Crater can be seen in the distance beyond the pebbly ground. Images released Aug. 8, 2012.
(Image: © NASA/JPL-Caltech)

In the new black-and-white image, Curiosity's Gale Crater landing site bears a striking resemblance to the desert landscape a hundred miles or so east of NASA's Jet Propulsion Laboratory in Pasadena, Calif., where the rover was built, scientists said.

"To a certain extent, the first impression that you get is how Earthlike this seems, looking at that landscape," Curiosity chief scientist John Grotzinger, of Caltech in Pasadena, told reporters.

"You would really be forgiven for thinking that NASA was trying to pull a fast one on you and we actually put a rover out in the Mojave Desert and took a picture," Grotzinger added. "A little L.A. smog coming in there." [Gallery: First Mars Photos from Curiosity]

The high-resolution photo looks to the north, toward the rim of the 96-mile-wide (154 kilometers) crater. An area of disturbed ground is visible in the foreground, perhaps 6 feet (2 meters) from Curiosity, researchers said.

During Curiosity's landing, the thrusters on the rover's rocket-powered sky crane blasted away enough dirt in this spot to expose some bedrock, which excites the mission team.

"Here we've already got an exploration hole drilled for us," Grotzinger said. "We got a freebie right off the bat."

The photo is a composite of two images taken by Curiosity's navigation cameras, which are now fully checked out. The mission team has stitched many navcam thumbnail photos into a panorama, and they're expecting to do the same with the high-res versions of the images once enough of them have come down to Earth.

Researchers also released several other Curiosity images today, including a high-resolution navcam shot showing the rover's 7-foot-long (2.1 m) robotic arm, which remains stowed, and the shadow of Curiosity's head-like mast, which was deployed to its vertical position yesterday (Aug. 7).

Another stunning shot was taken by the rover's Mars Descent Imager camera, or MARDI, about 2.5 minutes before Curiosity touched down. It captured the rover's heat shield a few seconds after it was jettisoned and began to fall away from Curiosity's spacecraft.

A thumbnail version of this image was already available, but the full-frame shot is a vast improvement.

"This is the good stuff," said MARDI principal investigator Mike Malin, of Malin Space Science Systems in San Diego. "It's quite spectacular."

Curiosity touched down inside Gale Crater Sunday night (Aug. 5). The rover is set to spend the next two years or more cruising around Gale, investigating whether or not the area can, or ever could, support microbial life.

While some of the rover's early photos may remind Curiosity's handlers of home, they're eager to get a feel for the otherworldliness of Gale.

"We're looking at a place that feels really comfortable," Grotzinger said. "What's going to be interesting is going to be to find out all the ways that it's different."