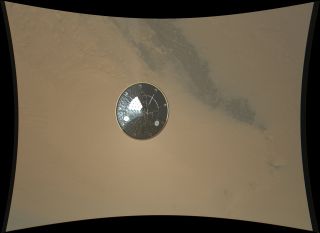 This color full-resolution image showing the heat shield of NASA's Curiosity rover was obtained during descent to the surface of Mars on Aug. 5 PDT (Aug. 6 EDT). The 15-foot heat shield was photographed by Curiosity's MARDI descent camera.
(Image: © NASA/JPL-Caltech/MSSS)

A shiny silver disk appears to float over the surface of Mars in a stunning photo taken during this week's landing of NASA's new rover Curiosity.

The flying saucer-like disk is actually the heat shield used to protect the Curiosity rover from extreme temperatures as it barreled down through Mars' atmosphere on its way to the ground Sunday (Aug. 5).

The rover, a $2.5 billion mobile science laboratory, will spend two years studying Mars' climate and geology for hints that the Red Planet may have ever had conditions hospitable to life.

The startlingly clear photo, one of several new views released by NASA today (Aug. 8), shows Curiosity's heat shield after it was shed about two and a half minutes before the rover landed. In the photo, the heat shield is roughly 50 feet (16 meters) away from the spacecraft, and had just been separated about three seconds earlier.

The heat shield is 15 feet (4.5 m) wide and built of multiple layers of protective insulation. The bright patches on its surface are calibration targets for the Mars Descent Imager (MARDI), the camera that took the photo.

The car-size rover's harrowing landing was described in advance as "seven minutes of terror" by NASA scientists. First, the heat shield helped dissipate some of the spacecraft's 13,000 miles per hour (21,000 kph) initial speed. Then, the vehicle deployed a parachute to slow down further and jettisoned its heat shield. Finally, a Sky Crane system used rocket engines to hover over the Martian surface, lowering the rover to the ground on cables.

Despite its difficulty, the maneuver was carried out apparently flawlessly.

"It was incredible, it was picture perfect," Fernando Abilleira, a member of Curiosity's navigation team, told SPACE.com. "It was just like clockwork, the spacecraft behaved so well."