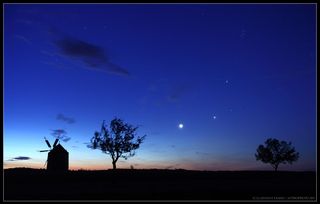 The crescent moon appears near Venus, Jupiter and the constellation Taurus. Astrphotographer Tamas Ladanyi took this image July 16, 2012 from Tés, a village in Veszprém county of Hungary famous for its beautiful windmills.
(Image: © Ladanyi Tamas / TWAN)

The crescent moon can be seen at dawn sitting between bright Venus, Jupiter and the constellation Taurus in this stunning photo.

Taurus looks like a stylized bull's head in the sky. The V-shaped portion of the constellation is the Hyades star cluster, which makes the face of the bull. This cluster is more than 600 million years old and consists of hundreds of bright stars. The nearby Pleiades star cluster, or M45, makes this region one of the most-studied by astronomers.

The image was taken by astrophotographer Tamas Ladanyi on July 16, 2012 from Tés — a village in the Veszprém county of Hungary famous for its beautiful windmills.

In the foreground of the image is one such windmill. The small, hilly town has six historic windmills, all of which were built before World War II.