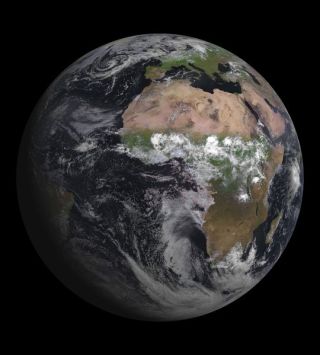 An image of the Earth taken by the European satellite MSG-3, released on Aug. 7, 2012.
(Image: © European Space Agency)

Europe's latest weather satellite has captured its first picture of the Earth, and it's a pretty one.

Launched on July 5 by the European Space Agency, the MSG-3 is performing well and on its way to becoming active after six months of development.

The satellite is spin-stabilized, meaning it can always face Earth and take high-resolution images. This first photo was taken with an instrument aboard the craft called the Spinning Enhanced Visible and Infrared Imager (SEVIRI). MSG-3 is the third in a series of four satellites introduced in 2002, while the last one, MSG-4, will be launched in 2015.

These satellites help provide better weather coverage and short-range forecasts for Europe and Africa, especially in the case of rapidly developing storms or fog. They can scan Earth's atmosphere every 15 minutes in 12 different wavelengths, to track cloud development.

In addition to its weather-watching mission and collection of climate records, MSG-3 has a radiation sensor to measures the amount of solar and infrared energy that is reflected back into space, to better understand climate processes.

The satellite also contains a "search and rescue" transponder that will allow it to relay distress signals from emergency beacons.