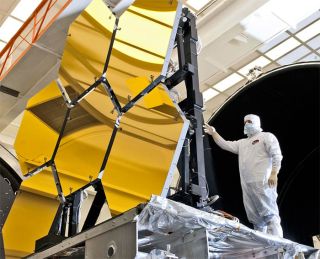 WASHINGTON — NASA plans to wait until 2015 to lay out a proposal for its next big astrophysics mission, which could take the form of a single large spacecraft or a series of smaller craft performing related studies, a senior agency official said July 30.

A new flagship mission stands almost no chance of being funded until after work is finished on the budget-busting James Webb Space Telescope, which is scheduled to launch in 2018, said Paul Hertz, director of NASA’s Astrophysics Division. But the planning can begin before JWST begins its five-year mission to study the origins of the universe.

When the prime contract for the James Webb Space Telescope, or JWST, was awarded in 2002, the observatory, billed as the successor to NASA’s hugely successful Hubble Space Telescope, was expected to launch in 2010 and cost a few billion dollars. The observatory’s projected price tag has since risen to nearly $9 billion.

“Unless a miracle occurs, our next opportunity to start a new strategic mission will be after [JWST] launches,” Hertz told members of the NASA Advisory Committee’s astrophysics subcommittee. “In 2017 we hope to start [work on] a new mission. We will put that plan in front of the community [in 2015] through the mid-decade review to find out whether they think we did a good job in following the decadal survey.” [Giant Space Telescopes of the Future (Infographic)]

Hertz said he will share more details about the options being considered for the 2015 mission proposal in a draft white paper to be released to the astrophysics community ahead of the American Astronomical Society’s Jan. 6, 2013, winter meeting in Long Beach, Calif.

Hertz shared few details about the concepts being considered, but he did say NASA is “keeping the option open for a Wide Field Infrared Survey Telescope, if the science that was supported in the decadal survey still drives us in that direction and if the politics allow us to do it.”

Other options include missions that Hertz characterized as probes that in price and scale would fall somewhere between NASA’s Explorer series of astrophysics missions, which cost up to several hundred million dollars, and a JWST- or Hubble-class observatory.

The Wide Field Infrared Survey Telescope was proposed as a $1.6 billion dark-energy mapping mission. Such an observatory could help scientists measure and understand the expansion of the universe and was accorded a high priority by the decadal survey.

However, the delays and soaring costs on the highly ambitious JWST mission forced NASA’s Astrophysics Division to square its future plans with the budget realities of the present. The full effect of this fiscal calculus was manifest in the White House’s 2013 budget request, which proposed halting development work on the Wide Field Infrared Survey Telescope.

One possible way of reviving the stalled project would be to use one of the two Hubble-sized optical telescope assemblies given to NASA by the National Reconnaissance Office (NRO) earlier this year. NASA is studying whether one of the former spy telescopes would be suitable for such a mission, but Hertz said there is no guarantee that the Astrophysics Division will use the hardware at all.

“The NRO telescopes are only an opportunity,” Hertz said. “If it’s not a good opportunity we can choose not to use them.”

The telescope assemblies, which feature mirror apertures 2.4 meters in diameter, are now stored at ITT Exelis’ spacecraft optics facility in Rochester, N.Y. This caretaking arrangement costs NASA about $100,000 a year, a bill the agency must pay until it decides how to use the hardware.

That decision will be made not by the Science Mission Directorate, the umbrella organization for the Astrophysics Division, but by the NASA administrator, Hertz said.

“Everybody from the administrator to members of our oversight committees in Congress to our colleagues in the White House are aware of [the telescopes] and think they have great ideas about how to use them or not use them,” Hertz said.