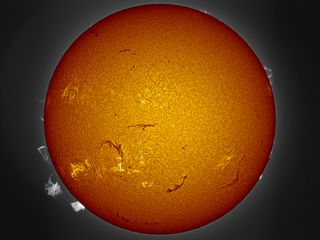 A mesmerizing photo of the sun, showing three huge solar eruptions bursting from the surface, was captured by an amateur astronomer in California.

Jim Lafferty observed the active sun from his backyard observatory in Redlands, Calif. on July 28. He used a Lunt 100 solar telescope to snap a photo of three eruptions, called prominences, along the southeastern edge of the solar limb.

Prominences are large, bright features on the sun that are often shaped like loops as they erupt from the solar surface. These tentacle-like features are hot tendrils of magnetic plasma and gas trapped inside.

"I was able to capture the "lift off" of one of 3 large prominences present on the southeastern edge of the sun's limb," Lafferty told SPACE.com in an email. "Quite an exciting moment!"

The photo was taken at approximately 1:57 p.m. EDT (1757 GMT) on July 28. That same day, the sun let loose a moderate M6-class solar flare. The flare unleashed a wave of plasma and charged particles, called a coronal mass ejection (CME), into space that delivered a glancing blow to Earth on July 31.

Lafferty felt fortunate to catch the prominences as they were erupting from the solar surface.

"Normally I look at the sun visually through my scope before I start imaging so I was thrilled to see 3 large prominences lined up on the sun's SE limb," he said. "The one in the center had already begun to "lift-off" the limb but was still big and bright. I knew I may have to act fast to get a shot since these events sometimes last just a matter of minutes." [Stunning Photos of Solar Flares & Sun Storms]

After quickly removing the telescope's eyepiece and attaching his camera, Lafferty snapped the stunning photo of the sun. The portrait was created by combining two "master" images — one of the solar disk and one of the prominences — both exposed to highlight as much detail as possible, he explained.

"It's such a thrill to see the sun's features change shape right before your eyes!" Lafferty said.