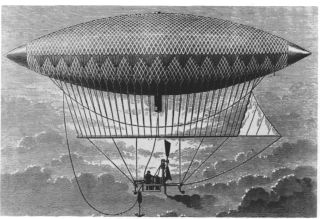 This is part of a SPACE.com series of articles on the Greatest Moments in Flight, the breakthrough events that paved the way for human spaceflight and its next steps: asteroid mining and bases on the moon and Mars.

Soon after the Montgolfier brothers launched the first hot-air balloon in 1783, inventors began to design ways to propel and control lighter-than-air aircraft. The major drawback in balloon travel was that it was essentially a one-way trip. If lighter-than-air flight was going to be successful, there had to be a way to steer the airship, or dirigible. The word "dirigible," in fact, comes from the French word diriger, meaning "to direct or to steer."

In 1784, General Jean Baptiste Marie Meusnier designed an elliptical airship that was about 260 feet (79 meters) long. It was to be powered by three hand-cranked propellers, which required the labor of 80 men. Meusnier's design was never built.

In 1850, another Frenchmen, Pierre Jullien of Villejuif, demonstrated a cigar-shaped model airship at the Paris Hippodrome. The airship's rudder, elevator, and gondola were mounted under the front part of the balloon. A clockwork motor that drove two airscrews mounted on either side of a center line propelled the airship. A light wire frame stiffened by a truss maintained the bag's form. Jullien was onto something that another man would leverage.

Jules Henri Giffard, a French engineer and inventor, took note of Jullien's design. He built the first full-size airship — a cigar-shaped, non-rigid bag that was 143 feet (44 meters) long and had a capacity of 113,000 cubic feet (3,200 cubic meters). He also built a small 3-horsepower (2.2-kilowatt) steam engine to power a three-bladed propeller. The engine weighed 250 pounds (113 kilograms) and needed a 100-pound (45.4 kilograms) boiler to fire it.

The first flight of Giffard's steam-powered airship took place Sept. 24, 1852 — 51 years before the Wright Brothers’ first flight. Traveling at about 6 miles per hour (10 kilometers/hour), Giffard traveled almost 17 miles (27 kilometers) from the Paris racecourse to Elancourt, near Trappes. The small engine could not overcome the prevailing winds, and Giffard could only manage to turn the airship in slow circles. He did, however, prove that in calm conditions controlled flight was possible.

The first round trip

The first airship to return to its starting point was a vast improvement over earlier models. Charles Renard and Arthur C. Krebs, inventors and military officers in the French Army Corps of Engineers, built an elongated balloon, La France. It was 165 feet (50.3 meters) long, and it had a capacity of 66,000 cubic feet (1,869 cubic meters). A battery-powered electric motor propelled La France.

The motor drove a four-bladed wooden tractor propeller that was 23 feet (7 meters) in diameter. The airship also had a rudder and elevator, ballonnets, a sliding weight to compensate for any shift in the center of gravity, and a heavy guide rope to assist in landing.

The first flight of La France took place on Aug. 9, 1884. Renard and Krebs landed successfully at the parade ground where they had begun—a flight of 5 miles (8 kilometers) and 23 minutes in which they had been in control throughout. During 1884 and 1885, La France made seven flights. Although the batteries limited its flying range, the airship demonstrated that controlled flight was possible if it had a sufficiently powerful lightweight motor.

The Greatest Moments in Flight