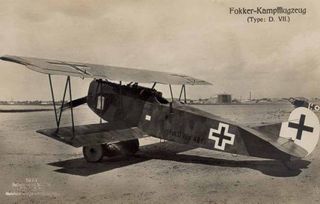 The Fokker D. VII was a German fighter plane that became so feared that the Allies demanded the Germans turn over all of them at the end of the war.
(Image: © Aerospaceweb.org)

This is part of a SPACE.com series of articles on the Most Amazing Flying Machines Ever, the balloons, airplanes, rockets and more that got humans off the ground and into space.

Aircraft became tools of modern warfare barely a decade after the Wright Brothers first flew at Kitty Hawk. The outbreak of World War I led to the first widespread use of military aircraft for reconnaissance, bombing runs and air superiority — and no wartime pilot earned more lasting fame for his aerial exploits than Germany's Manfred von Richthofen.

Richthofen rose to become the most successful flying ace of the war by shooting down 80 Allied planes and earning the nickname "The Red Baron" before his own death. He and his fellow pilots flew wood-and-fabric biplane aircraft that would have seemed incredibly slow by modern standards, but battlefield innovations transformed the flying machines into deadly weapons and added a third dimension to war.

Early aerial combat proved impractical, if not almost impossible. Pilots and observers sometimes carried their own pistols or rifles to shoot at enemy aircraft, or mounted machine guns for rear gunners.

But engineers eventually figured out how to mount forward machine guns on single-seat aircraft without shooting off the aircraft's own propeller blades. That innovation allowed pilots to line up targets by simply pointing their aircraft at the enemy, as well as reload the machine guns easily.

A French pilot named Roland Garros scored several kills by using forward-firing machine guns with armored propellers to deflect stray bullets (a design developed by Raymond Saulnier). But the big breakthrough came from the German Fokker company's development of a synchronizer mechanism that prevented an aircraft's machine guns from firing while a propeller blade was in the way.

German use of the synchronizer technology gave them a serious edge in aerial combat for almost a year between the summers of 1915 and 1916 — a terrifying period for Allied pilots known as the "Fokker Scourge." The Allies eventually came back with their own synchronizer designs, including a superior design made by Romanian inventor George Constantinescu.

The aerial balance of power seesawed back and forth as the Allies and Germans each introduced new aircraft that could fly faster, maneuver more nimbly, and dive more steeply without their wings ripping off. But the Allies could produce many more aircraft than the Germans, and they built excellent fighters such as the British Sopwith Camel F-1 — an aircraft credited with more enemy kills than any other World War I counterpart.

Regardless of what he flew, Richthofen continued racking up kills in the different versions of his red-painted German aircraft. He emphasized formation flying and careful aerial combat tactics rather than showy flight stunts. As a result, his "Flying Circus" squadron built an impressive win-loss record against the Allies and produced a number of ace pilots with five or more kills.

Most of the Richthofen's victories came in Albatros fighters, but he became associated with the Fokker Dr. I triplane he was flying at the time of his death. He tested and enthusiastically endorsed the newer Fokker D. VII biplane shortly before his death — a German fighter that became so feared that the Allies demanded the Germans turn over all of them at the end of the war.

The Red Baron's death came as he chased a Sopwith Camel over the front lines on April 21, 1918. Struck by several bullets, Richthofen managed to crash-land his plane before dying. A Canadian Sopwith Camel pilot and Australian soldiers have all claimed they killed the Red Baron, but a leading theory based on eyewitness testimony and Richthofen's postmortem exam suggests that an Australian machine gunner named Cedric Popkin likely fired the fatal shots.

By connecting aviation to warfare, World War I set the stage for military needs to help drive development of aircraft technology well into the space age.

The Greatest Moments in Flight