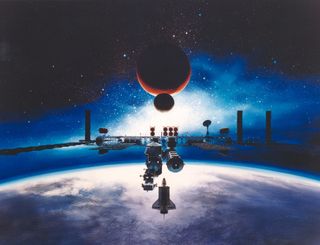 Alan Chinchar's 1991 rendition of the Space Station Freedom in orbit is shown in this artist's conception.

The painting depicts the completed space station. Earth is used as the image's backdrop with the Moon and Mars off in the distance. Freedom was to be a permanently crewed orbiting base to be completed in the mid 1990's. It was to have a crew of 4. Freedom was an attempt at international cooperation that attempted to incorporate the technological and economic assistance, of the United States, Canada, Japan, and nine European nations.

The image shows four pressurized modules (three laboratories and a habitat module) and six large solar arrays which were expected to generate 56,000 watts of electricity for both scientific experiments and the daily operation of the station. Space Station Freedom never came to fruition. Instead, in 1993, the original partners, as well as Russia, pooled their resources to create the International Space Station. [Far Out Space Station Concepts by NASA (Gallery ]

Each weekday, Space.com looks back at the history of spaceflight through photos (archive).