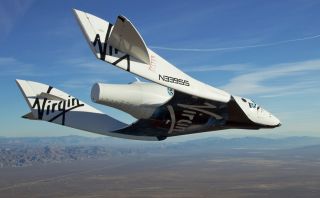 Virgin Galactic’s bid to start launching ticket-carrying passengers to the edge of space is aiming for a first liftoff by the end of next year, but the plan depends heavily on the success of a series critical rocket-powered test flights.

SpaceShipTwo is the first rocket-powered vehicle designed to fly humans on board to receive such an FAA permit. Commercial operations of the six-passenger, two-pilot vessel will eventually be carried out at New Mexico’s Spaceport America. The price per SpaceShipTwo space traveler: $200,000.

In preparation for powered flight, the SpaceShipTwo is being readied for return to flight at the Mojave Air and Space Port, testing the aerodynamic performance of the spacecraft with the full weight of the rocket motor system on board.  "Target date of first in-flight hybrid test is toward the end of this year," said George Whitesides, president and CEO of Virgin Galactic. He added that the hybrid motor test series would involve short, medium, and long burns of the system."They will take place over the course of a few months," Whitesides told SPACE.com.

"The Spaceship program is making steady progress, and we are all looking forward to lighting the vehicle’s rocket engine in flight for the first time,” Scaled Composites President Doug Shane said in a press statement.

While SpaceShipTwo uses a hybrid rocket motor like its SpaceShipOne predecessor, there are some differences that have required extra attention.

"The main thing is that it is bigger. Installation has not been a challenge, but developing the first hybrid rocket motor at this scale for human spaceflight is something that we are taking the time to get right," Whitesides said.

Sierra Nevada Corporation’s (SNC) Space Systems is the main contractor for the rocket motor 2 program and has technical authority over its development. The company’s propulsion team has a multi-year contract with Scaled Composites to develop a production rocket motor for Virgin Galactic’s commercial space vehicle designed for space tourism.

SpaceShipTwo’s hybrid propulsion system will have a substantially larger thrust than its smaller predecessor. It is designed to be capable of producing more than four times the thrust of the SpaceShipOne motors.

Given a successful run of hybrid motor tests, what’s the prediction about running the WhiteKnightTwo/SpaceShipTwo system out of New Mexico’s Spaceport America?

The opening of the Virgin Galactic offices, Whitesides added, is an element of an on-going campaign focused on anchoring a company presence in New Mexico, tied to the beginning of suborbital space hops from Spaceport America.

"As we open our new offices and expand our team [in New Mexico], we intend to help create new opportunity through hospitality and tourism that will feature New Mexico on an international stage," Whitesides said in a press statement.

According to a recent survey undertaken by Virgin Galactic, they found that more than 50 percent of Virgin Galactic’s astronauts have already visited southern New Mexico and averaged a stay of three to five nights in areas neighboring Spaceport America.

The survey also showed that when Virgin Galactic customers visit New Mexico to undertake their spaceflights from Spaceport America, they intend to each bring an average of five guests with them to share their spaceflight experience.

In October 2010, Virgin Galactic brought more than 70 high-end travel agents from around the world to learn about the areas surrounding Spaceport America. A year later, the spaceline firm dedicated the Virgin Galactic Gateway to Space building.