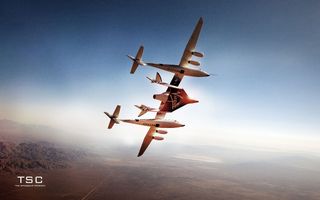 The first WhiteKnightTwo/SpaceShipTwo launch system has undergone extensive tests. Next to come are critical rocket-powered flights of the two-pilot, six-passenger spaceship.
(Image: © TSC)

George Whitesides, Virgin Galactic's president and chief executive, said in a May 30 announcement that the experimental launch permit from the U.S. Federal Aviation Administration (FAA) authorizes the Scaled Composites development team "to progress to the rocket-powered phase of test flight, bringing us a major step closer to bringing out customers to space."

Virgin Galactic's flight system consists of two vehicles, SpaceShipTwo and its WhiteKnightTwo carrier aircraft. Since late 2010, Scaled Composites, which designed and developed both craft, has been conducting unpowered tests in which SpaceShipTwo is released from WhiteKnightTwo and glides back to a runway landing.

Virgin Galactic says it has taken deposits from more than 500 customers agreeing to pay $200,000 for a ride on SpaceShipTwo. The SpaceShipTwo spacecraft are designed to launch six passengers and two pilots into suborbital space, offer a few minutes of weightlessness, then return to Eath. The company, led by entrepreneur Sir Richard Branson, has not set a date for beginning commercial service.

The company said May 30 that it expects to begin rocket-powered test flights before the end of 2012.

"In preparation for those powered flights, SpaceShipTwo will soon return to flight, testing the aerodynamic performance of the spacecraft with the full weight of the rocket motor system on board," Virgin Galactic said in the announcement. "Integration of key rocket motor components, already begun during a now-concluding period of downtime for routine maintenance, will continue in the autumn. Scaled expects to begin rocket powered, supersonic test flights under the just-issued experimental permit toward the end of the year."