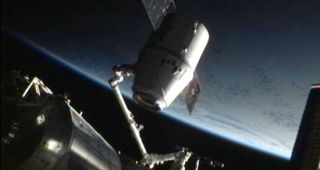 The world's first commercial space cargo ship, the unmanned Dragon capsule, cast off from the International Space Station today (May 31) as it prepares to return to Earth.

Dragon is the first private spacecraft ever to visit the $100 billion space station. The flight is a test mission under a NASA program aimed at supporting the development of new private space taxis to deliver cargo to orbit in the wake of the space shuttles' retirement.

The Dragon capsule is now due to fly back to Earth and splash down in the Pacific Ocean later this morning at 11:44 a.m. EDT (1544 GMT).

The robotic capsule, which measures 14.4 feet tall (4.4 meters) and 12 feet wide (3.7 m), delivered 1,014 pounds (460 kilograms) of food, supplies and student-designed science experiments to the station. For the return trip, it is loaded with cargo as well, including 1,367 pounds (620 kg) of crew items, used hardware and completed experiments.

Dragon spent a total of five days, 16 hours and 5 minutes attached to the International Space Station, after launching May 22 atop a SpaceX Falcon 9 rocket from Cape Canaveral, Fla. [Dragon Capsule's Space Station Arrival in Pictures]

The test flight was packed with demonstrations and trials for the new spacecraft, which previously flew only one mission to orbit in December 2010. Before being allowed to dock at the space station, Dragon had to prove its navigation and communications systems were working as planned, and that it was able to receive and respond to commands from SpaceX as well as the astronauts onboard the station.

"Dragon has passed these with flying colors," NASA commentator Josh Byerly said. "What's amazing is this is really only the second time this spacecraft has ever flown in space."

Dragon is rare among automated cargo craft in its ability to withstand re-entry to Earth. While those built by Russia, Japan and Europe are designed to burn up during re-entry, Dragon is equipped with a heat shield to survive the fiery plunge, and parachutes to ease its ocean splash down. The capsule is due to be recovered by ships off the coast of Baja California, Mexico.

SpaceX was founded in 2002 by PayPal co-founder Elon Musk. The company has a $1.6 billion NASA contract to fly 12 cargo delivery missions to the space station once this test run is complete.

The first of these could launch this fall, company officials have said.