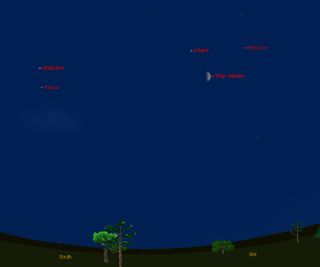 This sky map shows the location of Mars near the moon in the southwest on May 28, 2012, as wellas the positions of Saturn and two bright stars, at 9 p.m. local time from mid-northern latitudes.
(Image: © Starry Night Software)

Monday evening bring us a first quarter moon, offering U.S. skywatchers a chance to close out the Memorial Day holiday with a lunar treat and the fading planet Mars.

The first quarter moon is also sometimes called the "half" moon, although as darkness falls across North America close inspection with binoculars or a small telescope may reveal that there is actually a little more than half of the moon illuminated by the sun. That's because the actual moment of first quarter occurred earlier in the afternoon at 4:16 p.m. EDT or 1:16 p.m. PDT (2016 GMT).

When it gets sufficiently dark you'll also take notice of a rather bright yellow-orange star appearing well above and a bit to the moon's left. That’s not a star, however, but a once brilliant planet that continues to ebb in brightness: Mars. Look for this colorful world shining high in the southwest during dusk and lower in the west-southwest as night grows late.

Mars will remain prominent all evening, despite the fact that it will continue to slowly fade in the days and weeks to come as it gradually pulls away from the Earth. When the moon passes it by on Monday, it will still be shining at a respectable magnitude +0.5, which is just a trifle dimmer than the ruddy star Betelgeuse in Orion. [Amazing Pictures of Mars]

Astronomers measure the brightness of objects in the sky on a magnitude scale. The lower an object's magnitude number, the brighter it appears in the night sky. Small digits and negative number magnitudes denote the brightest night sky objects.

But Mars will then be edging toward Spica and Saturn and will have a striking interaction with those two objects later in the summer.

On June 21, Mars will leave the boundaries of Leo, where it has resided since the beginning of February, and moves into Virgo. On the North American evening of June 28, Mars will pass just 15 arc minutes – 0.25 degrees – south of the 3.8-magnitude star, Beta Virginis. To get an idea of how close that is, that’s one-half the apparent width of the moon.

Because Mars soon comes to eastern quadrature – a point in the sky that is 90 degrees east of the sun – on June 7, it should now appear distinctly gibbous in even a very small telescope. Most amateur telescopes won’t be showing any substantial detail on Mars; in fact by the end of June its apparent diameter will have shrunk to 6.6 arc seconds, which is less than half the size Mars appeared to us in early March when it was closest to earth at 62.6 million miles (100.7 million kilometers) away.  In contrast, by Jun. 30, Mars will have receded to a distance of 131.8 million miles (212.1 million km) from us.

But at least we have a spacecraft heading for the Red Planet that is drawing near!

The Mars Science Laboratory, which launched in November 2011, is carrying the 1-ton Curiosity rover which is scheduled to land on the Martian surface early on Aug. 6 to begin a two-year prime mission. Curiosity's landing site is near the base of a mountain inside Gale Crater, near the Martian equator. Researchers plan to use Curiosity to study layers in the mountain that hold evidence about wet environments of early Mars.

Editor's note: If you snap an amazing picture of the moon and Mars that you'd like to be considered for use in a story or gallery, please send images and comments to SPACE.com managing editor Tariq Malik at tmalik@space.com.