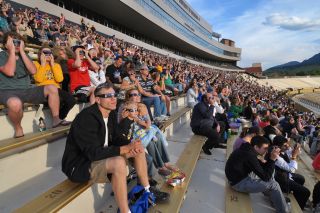 BOULDER, Colo. - Thousands of people turned their eyes to the sky at the University of Colorado's Folsom Field football stadium here Sunday (May 20) to watch the moon slip in front of the sun to create a spectacular "crescent sun."

The partial eclipse in Colorado occurred during a rare annular solar eclipse, in which the moon passed in front of — but did not completely obscure — the sun. In parts of China, Japan and eight western states, the celestial show created a dazzling "ring of fire" effect, while wide swathes of the U.S., including Colorado, saw a partial solar eclipse.

But even a partial eclipse was enough to draw a crowd of thousands to Folsom Field to see the moon take a bite from the sun. The organizers had billed the event as the world's largest solar eclipse viewing party.

At times, clouds periodically obscured the eclipsed sun, eliciting boos from the crowd. But when the clouds parted at 7:13 p.m. MDT (9:13 p.m. EDT/0113 GMT) several minutes before the maximum eclipse, it left some in the stadium speechless. [First Photos of May 20 Solar Eclipse]

"I can't think of words," said Bryce Pantoja, 15, who came with his family from the nearby city of Castle Rock to view the solar eclipse.

Astronomer Douglas Duncan, the director of the Fiske Planetarium at the University of Colorado, Boulder, arranged the eclipse-viewing event, mobilizing thousands of specialized solar-viewing glasses for the occasion. About 50,000 pairs of solar eclipse glasses were sold or given to schoolchildren in the days before the event, Duncan told SPACE.com.

There was no official count of the crowd at Folsom Field, but viewers likely numbered in the thousands and filled most of the upper deck of the stadium's eastern side. Duncan said the group was in the running for a world record of number of people viewing an eclipse at the same time. About 13,000 people were expected to attend the event.

The atmosphere in the stadium was alternately elated and disappointed as clouds turned eclipse-viewing into a game of hide-and-seek. Duncan and other astronomers entertained the crowd with raffles, astronomy tidbits and trivia during the slow creep of the moon's silhouette across the sun.

Twice, the astronomers instructed the crowd to stand up, face east and blow the clouds away — a tongue-in-cheek protest against the moody weather.

As the eclipse reached its maximum, clouds again moved in, leaving only portions of the sun visible. A chant of "move that cloud" rose up in the stadium. Shortly after the maximum, the crowd got an unobscured view of the waning eclipse. At sunset, pine trees on the mountainous horizon silhouetted against the parts of the sun left exposed.

Schneider's father, Nicholas Schneider, is an astronomer at the University of Colorado, Boulder. Watching the eclipse through a pair of filtered binoculars, Schneider said that the show is only a warm-up for Aug. 21, 2017, when a total solar eclipse will be visible over most of North America.

"This is going to be beautiful," he said of the May 20 eclipse. "But a total solar eclipse is mind-blowing."