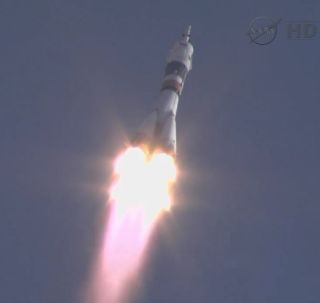 A Russian rocket launched three astronauts toward the International Space Station late Monday night (May 14), kicking off a two-day journey to the huge orbiting lab.

The Soyuz is slated to dock with the space station shortly after midnight EDT (0400 GMT) on Thursday (May 17). Once aboard, the three spaceflyers will bring the orbiting complex back to its full complement of six residents. Their fellow Expedition 31 crewmembers — NASA's Don Pettit, Dutchman Andre Kuipers and cosmonaut Oleg Kononenko — have had the station to themselves since April 27.

The launch was a long time coming for Acaba, Padalka and Revin. They were supposed to lift off on March 29, but their flight was delayed for six weeks after a botched pressure test rendered their original Soyuz capsule unusable and forced a new one into service. [Photos: New Expedition 31 Mission Begins]

The three newcomers will live aboard the station for four months, eventually returning to Earth in mid-September, NASA officials said.

The veteran cosmonaut Padalka already has two long-duration stints aboard the space station under his belt, but the experience will be a new one for the other two astronauts aboard the Soyuz. Acaba visited the station for less than two weeks on his lone previous spaceflight, the shuttle Discovery's STS-119 mission in 2009. And Monday's launch marked Revin's first trip to orbit.

Acaba said he's looking forward to his extended stay aboard the station.

"When you do a shuttle flight, you know, it’s two weeks, you’re jam-packed, and you’re just there and you’re working hard, and I don’t think you get the opportunity to really enjoy living in space," he said in a pre-flight interview with NASA officials.

"I think living there instead of just working there will be a neat thing, personally, and then professionally just the wide range of things that we do — I’m really looking forward to that," Acaba added.

Acaba, Padalka and Revin will all serve as flight engineers under Kononenko, who's commanding Expedition 31.

While spending four months in orbit would be exciting under any circumstances, Acaba and his five crewmates will participate in something truly historic if all goes according to plan.

The private spaceflight firm SpaceX plans to launch its Dragon capsule on an unmanned demonstration mission to the station this Saturday (May 19). SpaceX holds a $1.6 billion NASA contract to make 12 robotic cargo runs to the orbiting lab with Dragon and the company's Falcon 9 rocket, and Saturday's liftoff will kick off a test flight to see if the duo is ready to go.

If everything goes well, Dragon will be the first private spaceship ever to berth with the space station, and SpaceX could launch the first of its 12 bona fide supply missions later this year.