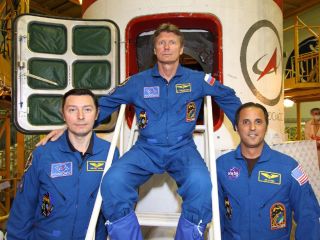 Sergei Revin (left), Gennady Padalka (center) and Joe Acaba (right) pose in front of the hatchway to their Soyuz TMA-04M spacecraft as they completed their final "fit check" inspection of the vehicle on May 11, 2012. The three will launch toward the space station on May 14.
(Image: © NASA/Victor Zelentsov )

Three astronauts are finally ready to blast off toward the International Space Station tonight (May 14), after weeks of delay caused during testing of their Russian-built space capsule.

Acaba, Padalka and Revin were originally scheduled to launch on March 29, but a botched pressure test cracked their Soyuz crew capsule. The flight was pushed back by a month and a half to allow enough time for Russian space contractor RSC Energia to ready a new capsule for service.

Once aboard the space station, the three spaceflyers will bring the orbiting lab back to its full complement of six occupants. Their fellow Expedition 31 crewmembers — NASA's Don Pettit, Dutchman Andre Kuipers and cosmonaut Oleg Kononenko — have had the station to themselves since April 27.

Acaba, Padalka and Revin will live in orbit for the next four months, eventually returning to Earth in mid-September, NASA officials said. The three newcomers will all serve as flight engineers under the command of Expedition 31 chief Kononenko. [Quiz: The Reality of Life in Orbit]

Acaba, 44, is a native of Inglewood, Calif., and is making his second career spaceflight. He has been to the station once before, on the space shuttle Discovery's STS-119 mission in 2009. But he returned  to Earth after just 13 days on that flight, so this will be a new experience for him.

"I'm looking forward to going from someone who worked for two weeks in space as a shuttle crewmember to now living in space — living and working in space — as a long-duration crewmember," Acaba told reporters earlier this year. "Personally, I think it'll be a much different experience — instead of just a whirlwind, 'let's get the job done' to, you know, 'now this is your home.'"

Acaba is one of NASA's educator astronauts and taught high school and middle school before joining NASA's astronaut ranks in 2004.

Padalka, 53, is a veteran spaceflyer making his third trip to the International Space Station on the Expedition 31 flight. A father of three from Krasnodar, Russia he has racked up a total of 585 days in Earth orbit.

Tonight's launch will mark Padalka's fourth career spaceflight, making him the most seasoned spaceflyer aboard the Soyuz capsule. In addition to his two International Space Station flights in 2004 and 2009, Padalka also flew to Russia's Mir space station in a 198-day mission that spanned parts of 1998 and 1999.

Unlike Padalka and Acaba, tonight's launch will mark the first trip to space for Revin.

"I'm really looking forward to the experience," Revin, 46, told SPACE.com through an interpreter a few months ago, citing the chance to do important work and be part of a talented team.

"From the emotional point of view, the emotional aspect, I'm really excited about having the opportunity to study Earth and all that surrounds it," he added. "And also, I'm looking forward to communicating with children and with other people, because this is a great opportunity, using the resources that the station can provide, for communication."

Revin is a native of Moscow, Russia, and has one son with his wife Irina. He joined Russia's Federal Space Agency as a test cosmonaut in 1996.

While a stay aboard the space station is doubtless always exciting, the Expedition 31 crewmembers will be treated to a historic event if all goes according to plan.

The California-based company SpaceX is planning to launch its Dragon capsule on an unmanned demonstration flight to the orbiting lab on May 19, to see if the vehicle is ready to begin a series of 12 contracted robotic cargo missions for NASA.

If the misssion goes well, Dragon will be the first private spacecraft ever to dock with the space station, and the first of those 12 cargo runs could begin later this year.