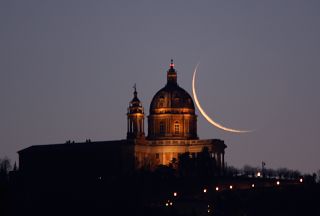 A slender old moon seems to be touching the top of this beautiful Italian church in this skywatcher image. The image was taken by Stefano De Rosa in Turin, Italy on Dec. 4, 2010.

The term “old moon” is a phase when the moon  is at its last quarter stage before becoming a new moon. During this time, the moon appears like a waning crescent in the night sky. The moon in this image was about one and a half days away from becoming a new moon. The building in this image is the Basilica of Superga, set high on the hills of Superga outside Turin. [Phases of the Moon Explained - Infographic ]

“The encounter was so close that the Moon (4° above the horizon) almost seemed willing to establish a ‘contact’ with the terrestrial monument, “ De Rosa wrote in an email.

“The remaining portion of the lunar disc is barely visible immersed in the glare of the twilight sky.”