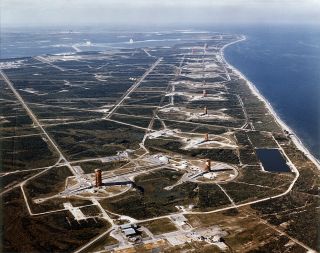 NASA and the Air Force have a long history of cooperation on big projects, not always for the sake of pure space exploration. This historical photo from the U.S. space agency shows an overall aerial view of Missile Row, Cape Canaveral Air Force Station. The view on Nov. 13, 1964, is looking north, with NASA's Vehicle Assembly Building (VAB) under construction, in the upper left hand corner.

By the late 1950s, with the Thor and Atlas ballistic missile programs heated up, the Air Force was building several heavy launch pads, with large concrete pads and steel towers for erecting and supporting missiles. With some launches, the pads suffered significant damage from missile explosions and had to be rebuilt. As the launch towers sprung up along a relatively small section of the Florida coast, the area was nicknamed Missile Row.