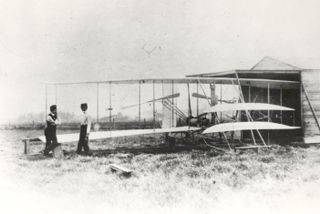 The Wright brothers invented a catapult to assist in launches at Huffman Prairie.
(Image: © NASA)

In this historical photo from the U.S. space agency, Wilbur and Orville Wright stand with the Flyer II at Huffman Prairie, outside of Dayton, Ohio, on May 1, 1904.

The event involved a little-known fact. While you might think the first airplane fights required light wind conditions, the reverse was actually true. The Wright brothers had a much more difficult time testing their aircraft at Huffman Prairie than at the historic site of Kill Devil Hills, North Carolina, due to the lack of high winds. Gusts could be dangerous, but a good stiff headwind was needed to get them off the ground.

To artificially reach the wind speed of 27 mph needed for liftoff, the brothers invented a catapult which provided the extra speed needed to become airborne. On Sept. 7, 1904, the Wrights tested the first catapult and it was a success, giving the Flyer II a push to make half-mile-long flights.