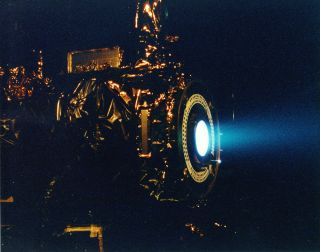 Charged ions being emitted from this xenon ion engine give off a faint blue glow.
(Image: © JPL)

In this historical photo from the U.S. space agency, a xenon ion engine is photographed on Jan. 1, 1999, through a port of the vacuum chamber where it was being tested at NASA's Jet Propulsion Laboratory. The blue glow is charged atoms being emitted from the engine. The ion propulsion engine is the first non-chemical propulsion to be used as the primary means of propelling a spacecraft.

The first flight in NASA's New Millennium Program, Deep Space 1, validated a dozen new technologies for scientific space missions of the next century. Ion propulsion was first proposed in the 1950s and NASA performed experiments on this highly efficient propulsion system in the 1960s, but it was not used aboard an American spacecraft until the 1990s.

Deep Space 1 was launched in October 1998 as part of NASA's New Millennium Program, which is managed by JPL for NASA's Office of Space Science. The almost imperceptible thrust from the ion propulsion system is equivalent to the pressure exerted by a sheet of paper held in the palm of your hand. The ion engine is very slow to pick up speed, but over long periods of time it can deliver 10 times as much thrust per pound of fuel as more traditional rockets, so for relatively modest cost, an ion engine can power a spacecraft to significant speeds and cover great distances. An ion engine is used on the Dawn mission to the asteroid belt, too.

Unlike the fireworks of most chemical rockets using solid or liquid fuels, the ion drive emits only an eerie blue glow as ionized (electrically charged) atoms of xenon are pushed out of the engine. Xenon is the same gas found in photo flash tubes and many lighthouse bulbs.