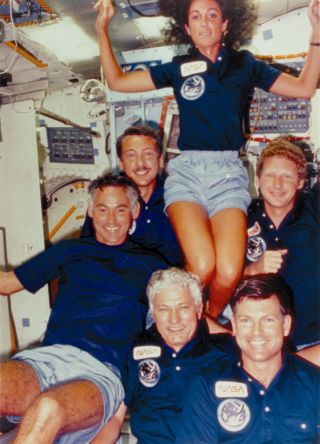 A fun moment of weightlessness with the crew aboard the orbiter Discovery.
(Image: © NASA.)

In this historical photo from the U.S. space agency, crewmembers of NASA's Space Shuttle mission STS-41-D, aboard the Discovery orbiter, take a group shot during a moment of fun in space.

Three satellites deployed during this mission: Satellite Business System SBS-D, SYNCOM IV-2 (also known as LEASAT2) and TELSTAR. The 102-foot-tall, 13-foot-wide Office of Application and Space Technology (OAST-1) solar wing extended from the payload bay. The wing carried different types of solar cells and extended to its full height several times. It demonstrated large lightweight solar arrays for a future in building large facilities in space such as a space station.