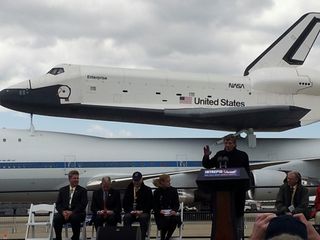 NEW YORK — Science fiction met fact with a "Star Trek" twist here today (April 27) when the space shuttle Enterprise, named in honor of the starship from the beloved television show, came face-to-face with Spock — Leonard Nimoy, that is.

The "Star Trek" actor was on hand at John F. Kennedy International Airport when the shuttle Enterprise flew in atop a jumbo jet Friday morning. Enterprise was delivered from Washington, D.C. to the Big Apple, where it will eventually go on display at Manhattan's Intrepid Sea, Air and Space Museum.

"This is a reunion for me," Nimoy said during a ceremony after Enterprise's touchdown. "Thirty-five years ago, I met the Enterprise for the first time."

Nimoy recalled the naming of the space shuttle orbiter, which was built as a prototype for NASA's reusable spaceship fleet. Though Enterprise never reached space, its test flights through the atmosphere in the late 1970s helped pave the way for the rest of the shuttles. [Photos: Final Voyage of Shuttle Enterprise]

"When this ship was first built, it was named Constitution," Nimoy said. "'Star Trek' fans can be very persuasive. They sent a lot of letters to president Gerald Ford and the president logically decided that the ship should be named after our spaceship Enterprise."

He and the rest of the "Star Trek" cast were invited to come see Enterprise back then, and the memory is still vivid more than three decades later, Nimoy said. He ended his remarks today with his character's famous catchphrase, "Live long and prosper."

The actor wasn't the only one feeling the "Star Trek" vibe at Enterprise's landing.

"To the Enterprise and to the Intrepid Museum I say, live long and prosper in your final resting place," said Senator Chuck Schumer (D-NY), echoing Mr. Spock's words.

Enterprise is set to move into its new home in June, when it will be pulled by barge up the Hudson River to the Intrepid's site on the western edge of Manhattan.

NASA retired its space shuttle fleet in July 2011. The three remaining space-flown orbiters — Discovery, Endeavour and Atlantis — and Enterprise are all headed for museum retirement homes.

Discovery was delivered to the Smithsonian National Air and Space Museum in Washington, D.C. last week. Enterprise had resided there and heads to the Intrepid to make room for Discovery. Endeavour has been promised to the California Science Center in Los Angeles; it's slated to fly west atop a carrier aircraft in September.

Atlantis won't take to the skies again. It will go on display at the Kennedy Space Center Visitors Complex in Florida, just down the road from where it currently sits.

A total of five space shuttles have flown in space, though two of them were lost along with their entire seven-astronaut crews. Challenger exploded shortly after liftoff in 1986, and Columbia broke apart upon re-entry to Earth's atmosphere in 2003.