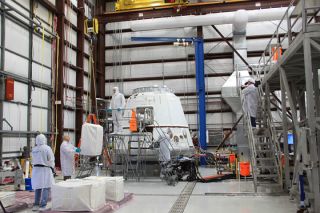 SpaceX tweeted on April 22, 2012: "Another shot from cargo loading with @NASA in anticipation of the upcoming demo flight to the Space Station."
(Image: © SpaceX)

A May 7 liftoff is the new official target for the historic first flight of a private spaceship to the International Space Station, the vehicle's builder announced today (April 24).

The new launch date, which is a full week later than an earlier April 30 target, comes a day after the commercial spaceflight company SpaceX announced a flight delay to allow extra time for spacecraft software tests. SpaceX plans to launch its unmanned Dragon capsule atop the firm's Falcon 9 rocket from the Cape Canaveral Air Force Station in Florida.

"NASA and the Cape Canaveral Air Force Station have approved SpaceX's request to set May 7th as the target launch date for the upcoming COTS 2 mission," SpaceX spokeswoman Kirstin Brost Grantham wrote today in an email to reporters.

The flight has been delayed several times to allow more time for testing of the novel robotic spaceflight system. SpaceX founder and CEO Elon Musk said the latest delay was necessary for checkouts of Dragon's docking software. The firm, officially called Space Exploration Technologies, is based in Hawthorne, Calif.

Dragon and Falcon 9 have launched on one previous test flight, an orbital jaunt around the planet in December 2010. This next liftoff will be the spacecraft's maiden mission to rendezvous and link up with the space station, the first time any non-governmental spaceship has done so.

If all goes well, Dragon will meet up with the weightless laboratory in Earth orbit, and then astronauts inside the station will grab onto the craft with the outpost's robotic arm, linking it to the station. Dragon is due to deliver supplies and equipment for the long-duration crew of six living onboard.

The launch is a demonstration for NASA's Commercial Orbital Transportation Services (COTS) program, which has funded the development of SpaceX's vehicle as a replacement for the cargo delivery services of the retired space shuttles.

While Dragon is flying unmanned for now, ultimately, SpaceX aims to launch people onboard the capsule.