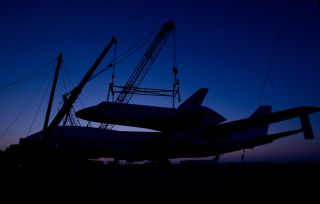 The prototype space shuttle Enterprise is seen in silhouette after it was mated on top of the NASA 747 Shuttle Carrier Aircraft (SCA) at Washington Dulles International Airport, Friday, April 20, 2012, in Sterling, Va. Enterprise will go on permanent display at the Intrepid Sea Air and Space Museum in New York in June.
(Image: © NASA/Bill Ingalls)

NEW YORK — Residents of the Big Apple may catch sight of an unusual sight over their famous skyline this week: a NASA space shuttle riding atop a jumbo jet.

NASA's prototype shuttle Enterprise is due to fly from the Dulles International Airport in Virginia to New York City's John F. Kennedy International Airport to be prepared for eventual public display in Manhattan. The move, which was originally scheduled for today (April 23), has been delayed due to weather. The flight is now expected to take place this week, though NASA officials it won't occur before Wednesday (April 25).

Enterprise is being transferred from the Smithsonian National Air and Space Museum's Steven F. Udvar-Hazy Center in Chantilly, Va., where it had been on display since 2003, to Manhattan's Intrepid Sea, Air and Space Museum, which is housed in a retired World War II Navy aircraft carrier. Last week, NASA delivered the shuttle Discovery to the Smithsonian annex, which replaced Enterprise at the Udvar-Hazy Center.

While Enterprise never flew to space, it was NASA's first space shuttle. The vehicle was built to perform glide tests that paved the way for the rest of the shuttle fleet. It was named after the fictional starship U.S.S. Enterprise from TV's "Star Trek" after a massive public write-in campaign by the show's fans to then President Gerald Ford in the 1970s. [Photos: A Space Shuttle Called 'Enterprise']

To transport its space shuttles across the country, NASA uses a modified Boeing 747 jet called the Shuttle Carrier Aircraft. Enterprise has been lifted by cranes and placed atop the jet, attached via three struts on the Boeing's fuselage.

On its way to JFK, Enterprise and its ride are due to fly over parts of New York City, including the Intrepid and the Statue of Liberty, at a relatively low altitude. Photographers should get their cameras ready for what will be a once-in-a-lifetime sight.

The flight, which is highly weather dependent, is being coordinated by the Federal Aviation Administration (FAA).

After it lands, Enterprise will be detached from its carrier plane and stored in a hangar at the airport until June, giving the Intrepid some extra time to ready its display area. When it's time for Enterprise to arrive at the museum, the shuttle orbiter will be towed by barge up the Hudson river, pulled by a tugboat.

Enterprise isn't the only shuttle to be installed in a museum this year. The shuttle Discovery, which flew 39 missions before being retired in 2011 (along with its sister ships Endeavour and Atlantis), was delivered to the Udvar-Hazy Center on April 19. Endeavour will be sent to the California Science Center in Los Angeles later this year, while Atlantis will be transferred to the Kennedy Space Center Visitors Center in Cape Canaveral, Fla.At first, Enterprise will be temporarily displayed in a climate-controlled pavilion on the flight deck of the Intrepid. Ultimately, Intrepid museum officials plan to build Enterprise a permanent showcase facility.