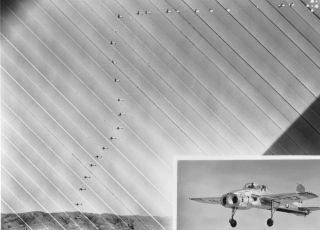 In this 1962 photo from the U.S. space agency, a landing on the lunar surface is simulated by the NASA Ames Research Center's Bell X-14A Vertical Take-off and Landing (VTOL) aircraft. The X-14 was an experimental plane designed to demonstrate hovering and vertical take-offs and landings. NASA used the X-14A for research on the subject prior to the Apollo lunar landings. It was not until July 20, 1969 that humans first landed on the moon in the Apollo 11 mission.

In the photo, photographed by a Fairchild flight data analyzer camera, the X-14A approaches its predetermined landing point from the right at an altitude of 1,000 feet. Vanes in the jet exhaust pipe are then turned to deflect the jet exhaust downward allowing the aircraft to descend vertically to a soft landing. The forward motion in the latter half of the descent was the result of the pilot's controlled correction to assure landing on a pre- determined point. The inset in the lower right hand corner of the photo is a close-up of the Bell X-14A during descent.

Each weekday, SPACE.com looks back at the history of spaceflight through photos.