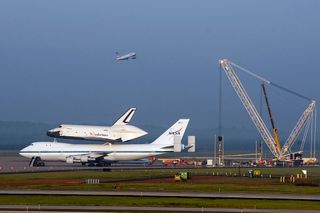 WASHINGTON — Space shuttle Enterprise's jet flight from Washington, D.C., to New York has gone from "on time" to "delayed."

Mounted early Friday morning (April 20) on top of NASA's Shuttle Carrier Aircraft (SCA), a modified Boeing 747 jet, Enterprise was scheduled to take off on Monday morning from Washington Dulles to John F. Kennedy International Airport to be displayed by the Intrepid Sea, Air & Space Museum. Instead, the ferry flight has been delayed.

"Enterprise flight to NYC postponed until further notice due to unfavorable weather forecast for [Monday]. Details to follow," the Intrepid wrote on Twitter on Friday afternoon.

According to the National Weather Service forecast, there is a 40 percent chance of rain at Dulles airport on Monday. On Tuesday, the chances are only slightly better with a 30 percent chance of showers. Conditions begin to improve on Wednesday, alternating between "mostly sunny" and "partly cloudy" for the remainder of the week. [How NASA Flies Shuttles on 747 Jets (Photos)]

At New York's JFK airport, the NWS predicts that rain is "likely" on Monday morning, with a 70 percent chance of precipitation. Tuesday is forecasted to be "mostly cloudy" with the weather improving the next day. Wednesday is expected to be "mostly sunny," although the chances for showers return that evening through Thursday.

NASA said the decision to postpone the flight was based on safety.

"To ensure a safe flight for Enterprise and the SCA, NASA managers, in consultation with the Intrepid Sea, Air and Space Museum decided Friday to delay the flight because of inclement weather predicted in both New York and Washington," the space agency said in a statement.

"Managers will continue to review weather forecasts and announce a new flight date as soon as practical," NASA said.

Rain is considered to be the primary hazard for shuttle ferry flights, according to SCA weather pilot Arthur "Ace" Beall in an interview posted earlier this month on NASA's website.

"The mass of a raindrop at the speeds being flown will damage the shuttle tiles in a matter of seconds," Beall explained. "so if any rain is encountered or observed, the weather pilot offers alternate routes and altitudes to the SCA crew."

"Additionally, the SCA does not have much extra fuel to maneuver significant distances around rain, so finding the most efficient, rain-free route in a short amount of time can be challenging. Turbulence is also a factor," he said.

Enterprise, which never flew in space but was used for a series of approach and landing tests in the late 1970s, is outfitted with some real silica tiles but is mostly covered by polyurethane foam block replicas.

Earlier this week, NASA announced it also planned to fly Enterprise at "relatively low altitudes" over various parts of New York City before coming in for a landing at JFK.

"If all goes as planned, the aircraft is expected to fly near a variety of landmarks in the metropolitan area, including the Statue of Liberty and the Intrepid Sea, Air and Space Museum," the agency stated.

The photogenic flyover was said to depend on the weather and other operational constraints.

Once the ferry flight is rescheduled and Enterprise is on the ground in New York, the shuttle will eventually be hoisted by crane off the 747 and placed on a barge that will be moved by tugboat up the Hudson River to the Intrepid museum in June. The shuttle then will be lifted by crane and placed on the flight deck of the Intrepid, which is a converted World War II aircraft carrier.

Enterprise will be exhibited in a climate-controlled pavilion targeted to open to the public in mid-July.