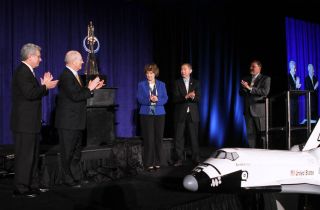 More than 9,000 space agency representatives, aerospace industry leaders, military officials and students are converging in Colorado this week for a conference to discuss and debate the major issues facing robotic and human spaceflight.

The 28th National Space Symposium is being held from April 16 to 19 at the swanky Broadmoor Hotel in Colorado Springs, Colo.

The event attracts space leaders from around the world, and will feature more than 100 speakers who will discuss a variety of topics that affect the global space community, said Janet Stevens, vice president of marketing and communications for the Space Foundation, which sponsors the National Space Symposium.

"This year's program is probably the most diverse we've ever had," Stevens told SPACE.com. "As the space sector becomes broader, we've shaped our program to accommodate a much broader palette of interests."

The Space Foundation is a non-profit organization that aims to increase space awareness, educational programs and advocacy for all aspects of the space industry.

Panelists at this year's symposium will lead discussions on a range of topics, including human spaceflight, international military collaboration, Earth observation, and satellite hosted payloads.

"Neil Tyson is the intergalactic space poet laureate of our time," Elliot Pulham, Space Foundation CEO, said in a statement. "He connects people with the universe with wit, humor and genius that has proven irresistible to his millions of readers, viewers, students, lecture guests and fans the world over. We are delighted to have Neil return to play a major role at the National Space Symposium."

In addition, executives from various aerospace companies, such as Boeing, Lockheed Martin, SpaceX, ATK, Pratt & Whitney Rocketdyne and Sierra Nevada will be in attendance.

This year's National Space Symposium features a much larger global presence, and as always, a "heavy focus on networking conducting business and getting work done," Stevens said.