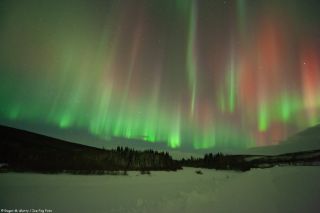 A team of scientists is lofting weather balloons high into Alaska's northern lights displays, getting a unique inside look at this dazzling atmospheric phenomenon.

The two-week expedition is called Project Aether: Aurora, and it's slated to run through April 13. The goal is threefold: Learn more about the northern lights (also known as the aurora borealis), test out equipment and help get kids more interested in science, technology, engineering and math — the so-called STEM subjects.

"We think that the excitement of the whole expedition, and the drama involved in completing this cutting-edge science, helps play into the motivation to go into the STEM fields," said project principal investigator Ben Longmier, a physicist at the University of Houston and chief research scientist at the Ad Astra Rocket Company.

SPACE.com was invited to check out the expedition first-hand. So I will be reporting from central Alaska April 10 to 11 — and hopefully even riding a dogsled out to help retrieve a balloon that has fallen back to Earth. [Photos: Dazzling Northern Lights of February 2012]

To the edge of the auroras

The auroras have captivated skywatchers for thousands of years. They result when charged particles from the sun collide with molecules in Earth's atmosphere, generating a glow. These particles are funneled over the poles along Earth's magnetic field lines, causing the northern lights in the Northern Hemisphere and the southern lights, or aurora australis, in the south.

The auroras are often supercharged by massive sun eruptions known as coronal mass ejections. CMEs send huge clouds of solar plasma rocketing into space at speeds of 3 million mph (5 million kph) or more. If the blast is aimed at Earth, skywatchers at high latitudes can be treated to quite a show when the particles arrive a day or two later.

The balloons carry high-definition cameras, which record video and stills of the aurora, Longmier said. The team is also getting video and photos of the northern lights from the ground and, hopefully, from high above the dancing displays as well.

The project is coordinating with astronaut Don Pettit, one of six crewmembers currently aboard the International Space Station, which zips around our planet at an altitude of 240 miles (386 km).

"He's got a busy schedule," Longmier told SPACE.com. "But if it happens to work out, and the space station is in conjunction with Fairbanks at the same time that we're in flight, we'll use the NASA imagery to synch up with our balloon imagery and the ground photos."

Project Aether: Aurora is collaborating with schools to teach physics concepts and research skills via the expedition. It's also working with GoPro, which is providing the balloon-borne cameras, to get the stunning aurora footage out to the public, Longmier said.

In addition to the cameras, the project is lofting some other payloads, testing out how well low-cost, off-the-shelf equipment can make a variety of measurements within the aurora's plasma environment.

The team hopes to launch between 10 and 30 balloons by the time the expedition wraps up April 13, Longmier said. The team will track each one down after it bursts high up in the atmosphere and returns to Earth, slowed by a parachute.

Roads in central Alaska can be few and far between, so retrieving the fallen payloads can be a bit of an adventure.

"There are going to be expeditions out — just depending on the landing location — by dogsled, snowmobile and helicopter," Longmier said.

Jumping on a dogsled to chase down a balloon that has kissed the dancing green edge of Alaska's aurora — sounds like the kind of thing that could convince kids that science can be fun. And that's all part of Project Aether: Aurora's plan.