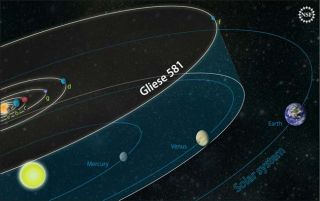 The orbits of planets in the Gliese 581 system are compared to those of our own solar system. The Gliese 581 star has about 30 percent the mass of our sun, and the outermost planet is closer to its star than we are to the sun. Gliese 581d might be able to sustain liquid water on its surface.
(Image: © Zina Deretsky, National Science Foundation)

Life may not get blasted off any of the known "super-Earth" worlds as readily as it can from our planet, scientists find.

The discovery suggests that any intelligent aliens that develop on such planets might find it hard to rocket off them and travel to other worlds as well, researchers added.

As scientists began discovering alien worlds around other stars, one class of planet that began appearing was super-Earths, planets larger than our own that can reach up to 10 times Earth's mass. A number of these super-Earths apparently lie in the habitable zones of their stars, where temperatures can support liquid water on their surfaces and thus, potentially, life as we know it.

If life exists on super-Earths, there might be a chance it could spread to sister planets via impacting asteroids and comets. Meteorites from Mars and the moon have been found on Earth, rocks blasted off by collisions that eventually crashed here. In principle, microbes on rocks knocked off Earth could very well land on other planets — some scientists have even suggested that life might have actually been seeded on Earth by meteors from Mars.

Now scientists find that, in contrast to our solar system, the exchange of living microbes between super-Earths and other planets in their systems is not likely to occur. [How Planets in Alien Solar Systems Stack Up (Infographic)]

"It is very difficult for materials to spread throughout that system in the same way it could take place in our solar system," said study co-author Jay Melosh, a planetary scientist at Purdue University.

Scientists analyzed the planetary system around Gliese 581, a red dwarf star with a mass about one-third that of our sun, which lies around 20 light-years from our solar system. All four planets found orbiting Gliese 581 are within close proximity to their central star, at distances from their star less than Mercury's distance from our sun. The red dwarf's fourth known planet, Gliese 581d, is a super-Earth that falls in the star's habitable zone.

The researchers used a computer model to simulate 10,000 rocks ejected off each planet in the Gliese system. The scientists found that the initial velocity of material leaving Gliese 581d is not enough to reach its sister planets. This is because these worlds move at very high velocities in their orbits around their star — any material blasted off them would therefore very likely slam back into these fast-moving planets.

"Ejections from planet 'd' have a low probability of impact on any other planet than itself, and most ejected particles would enter an initial hyperbolic orbit and be ejected from the planetary system," said study lead author Laci Brock, an undergraduate student at Purdue University. "Planet 'd' would have a very small chance of transferring material to the other planets in the Gliese system and, thus, is far more isolated, biologically, than the inner planets of our own solar system. It really shows us how unique our solar system is."

These findings also mean "if any technological civilization were to develop on one of its planets, it would find travel to the other planets in its system immensely more difficult than we do in our solar system because of these high velocities," Melosh told SPACE.com.

This scenario of restricted travel "also should apply to exchanges between large moons around the bigger, Neptune-like planets in the system — think of Titan in our own system, which might harbor life," Melosh added.

All the super-Earths discovered so far are similarly close to their stars — and those farther out probably will not eclipse their stars often enough for current telescope surveys to detect. As such, "none of the solar systems that have been found so far would have opportunities for exchange of life among the different planets like what our own solar system offers," Melosh said. "As planets in wider orbits are discovered in the habitable zones of brighter stars, it will be more likely to find exchanges among them."

The researchers plan to study travel in other, yet-to-be-discovered planetary systems.

"What is the optimal configuration for a closely communicating planetary system in which interplanetary travel is particularly easy?" Melosh said. "Such systems, when found, might be especially good targets for seeking technological civilizations and might be targeted for particularly thorough study by SETI."

Brock and Melosh detailed their findings March 20 at the Lunar and Planetary Science Conference in The Woodlands, Texas.