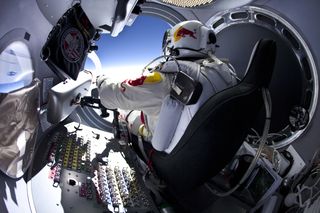 Pilot Felix Baumgartner of Austria prepares to exits the capsule before his jump at the first manned test flight for Red Bull Stratos in Roswell, New Mexico on March 15, 2012. In this test he reached 71,500 ft. (21,800 meters) and landed safely near Roswell. (Note: Lens profile correction was applied to the image.)
(Image: © Jay Nemeth/Red Bull Content Pool)

A series of amazing photos from a skydiver's 13-mile leap Thursday (March 15) set the stage for a record-breaking jump coming up later this year.

Austrian adventurer Felix Baumgartner is hoping to make the world's highest skydive this summer, in an event backed by energy drink company Red Bull. As a practice run, he leaped from a custom built capsule at an altitude of 71,581 feet (21,818 meters), marking his personal highest-jump ever.

Baumgartner's ultimate goal is to jump from 120,000 feet (36,576 m) later this year in what he hopes will also be the first supersonic skydive.

Photos released by the Red Bull Stratos project document every stage of Thursday's  practice dive. One photo shows Baumgartner, in his custom-built suit, preparing to leap from the capsule's door while another, taken from a camera mounted outside the capsule, captures the daredevil on the precipice, about to jump.

At 7,890 feet (2,405 m), Baumgartner deployed his parachute to slow down his free fall, and this stage, too, is documented in pictures.

"The view is amazing – way better than I thought," Baumgartner said in a statement.

About eight minutes after he leaped, the skydiver landed roughly 30 miles (48 kilometers) from Roswell, N.M., where his capsule had been carried aloft by a balloon that morning. Photos show him smiling and embracing members of the Red Bull Stratos team backing him, including life support engineer Mike Todd.

"On the way up, without even opening the capsule door you can find yourself in a life or death situation," Todd said. "So it’s extremely dangerous."